It is almost impossible to discuss the LIV series without mentioning the moral dimension, but let’s try. Many have wrestled with the fundamental issue: what’s in it for the money men?

It’s not a tax dodge, since income tax does not exist in Saudi Arabia. Neither do I think, as some have claimed, that it’s a public relations exercise. It’s far more likely to be the opposite, a middle finger in the face of the post-Covid world. Recession? What recession?

It’s certainly not a gathering of the best-liked elite players on the planet and it’s surely no coincidence that the slow trickle of big names from the PGA Tour reads like a most unwanted list: Phil Mickelson, Patrick Reed, Brooks Koepka and Bryson DeChambeau have probably had more column inches devoted to their prickly social demeanour than they have to their golfing achievements.

There is, however, one aspect of LIV which seems to have the backing of the ordinary golf fan. The chance for the (very) average professional golfer to take the Saudi money and run. From a local perspective it almost seems as if the whole concept was dreamed up as a pension scheme for South Africans. Charl Schwartzel and Branden Grace won the first two events but, vast though their earnings were, for these two the effect was not life-changing.

Louis Oosthuizen excepted, however, it’s very different for the other South Africans in the field. By finishing second to Schwartzel at the inaugural event (and sharing the team prize), Hennie du Plessis (left) earned close to $3-million. That’s approximately R50-million, small potatoes for Hennie’s fellow Gautenger, Elon Musk, but the end of the rainbow for the 25-year-old from Kempton Park.

But let’s step away from parochial concerns and, just for a moment, put our minds to how we might improve the product. Impossible though it might seem, let’s put ourselves in the position of the men pouring oil money into a bottomless pit. Do we really want a results page that ends with the names Itthipat Buranatanyarat, Blake Windred, Turk Pettit, Shaun Norris and Jediah Morgan, of whom it has often been said, ‘Who?’

Those were the men who finished from 44th to 48th in Portland and, yes, I do know that Shaun Norris is South African and has a certain amount of game. But here’s the point, none of those names is going to put bums on seats or increase the prestige of the event. So why not try this – two threeballs at the back of the field (have to get rid of that dreadful shotgun start) consisting entirely of club golfers. You can’t qualify, it’s a lottery, the 24-handicappers have as much chance as the scratch men and women.

Imagine how rounds might increase at your local club if the tantalising carrot of winning $120,000 just for turning up at a LIV event were to be dangled. Imagine the television coverage: ‘Oosthuizen moves to 14 under with that birdie. Let’s go to 18 and this is Smudger Smith from Pofadder and he’s got this to break 100 and buy the new kitchen his wife has been dreaming of … ’ 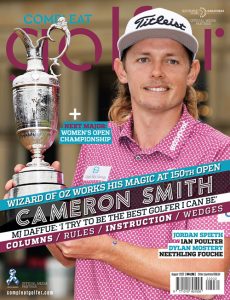