The end to the LPGA Tour season was a little different in 2021.

We are used to a stretch of six weeks of competition, with four of those weeks being played in Asia, but due to Covid and a mandatory quarantine in most of these countries we were only able to play in Korea.

The BMW Championship is normally one of the best weeks on the Tour, with great crowds as the Korean public are huge golf fans. We play in the city of Busan, which is on the coast, and stay in an amazing hotel on the beach but, once again, due to Covid restrictions we weren’t allowed out of the hotel unless it was to go to the golf course.

The trip started with a 14-hour flight from LA to Incheon and from there we had a six-hour bus ride to Busan. They would not let us transfer to the domestic terminal to take what would normally be a 45-minute flight. It’s not the luxurious five-star life most people think pro golfers have.

The week was a little bit of a struggle as I injured my hand on the Wednesday of the tournament during practice. However it was a no-cut, guaranteed-money event with all expenses paid by the tournament sponsors so it’s still always a positive to come out with something at the end of the week.

After the quick one-week trip to Korea, it was back to the States for two weeks off to prepare for the final two tournaments of the year. I had to play well and needed a top-five finish in Tampa to make it to the season finale CME Group Tour Championship, for which the top 60 qualify. Unfortunately, the injury to my left hand/thumb flared up again and it became very difficult for me to commit to the shots over the weekend.

I finished 54th at my final tournament of the year and 70th on the CME rankings, missing out on the season-ending event. It was disappointing to not be playing at the CME but, to be honest, if I had qualified, I don’t think I would have been able to play. I was diagnosed with tendinitis and told to take four weeks off. All I can say is I’m glad it happened at the end of the season.

Looking back on the season, it was a little up and down. I didn’t perform well at the Majors, which is something I will work hard towards doing better next year. It was a year filled with Covid protocols, and the adjustment of living in the US full time and not being able to see our family and friends in South Africa as often was quite hard.

But at the same time it was great to finally have a place to go to on my weeks off. The top 100 on the CME rankings keep their cards so it was still a reasonable year and I look forward to what 2022 holds. Here’s wishing you all a happy and safe festive season. 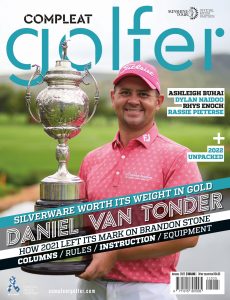 Gary Lemke Column: Golf rankings becoming meaningless
There is no point in having an ‘official world ranking’ if all golfers aren’t going to... END_OF_DOCUMENT_TOKEN_TO_BE_REPLACED