The 2021 PGA Tour season is already in full swing and the battle for the FedEx Cup is already heating up in America. ANDRE HUISAMEN analysis how things stand over the festive break.

The PGA Tour competitors are already a whole 12 events into the new 2021 season following Dustin Johnson’s emphatic FedEx Cup victory in September where he was crowned the tour’s best player for 2020.

A lot, though, has happened since the Tour Championship, apart from Johnson only continuing his dominance and strengthening his grip at the top of the FedEx Cup standings and as the world’s best player.

Despite battling Covid-19 in the lead up to the November Masters, where he missed a couple of events, Johnson was able to deliver a masterclass performance at Augusta National to move above Bryson DeChambeau on the standings.

READ: Dustin: Legend in the making

The big-hitting DeChambeau started the new season with a bang by winning the US Open at Winged Foot but was made to work a bit harder in his quest for the Green Jacket – finishing in T34 in Georgia.

Apart from winning the Masters, Johnson on the other hand proved just how consistent he has become by securing a T6 finish at the US Open and a T2 at the Houston Open after his three-week layoff due to Covid-19.

Viktor Hovland, though, appears to be a man on a mission and is poised for a massive year in 2021 that could see him pull a few surprises along the way.

The Norwegian won the OHL Classic before the break that saw him rocket up to third spot on the FedEx Cup standings and up to 14th on the Official World Golf Rankings.

Veteran Stewart Cink will start the new year in 4th spot on the standings after winning the Safeway Open  in the opening event of the new season. 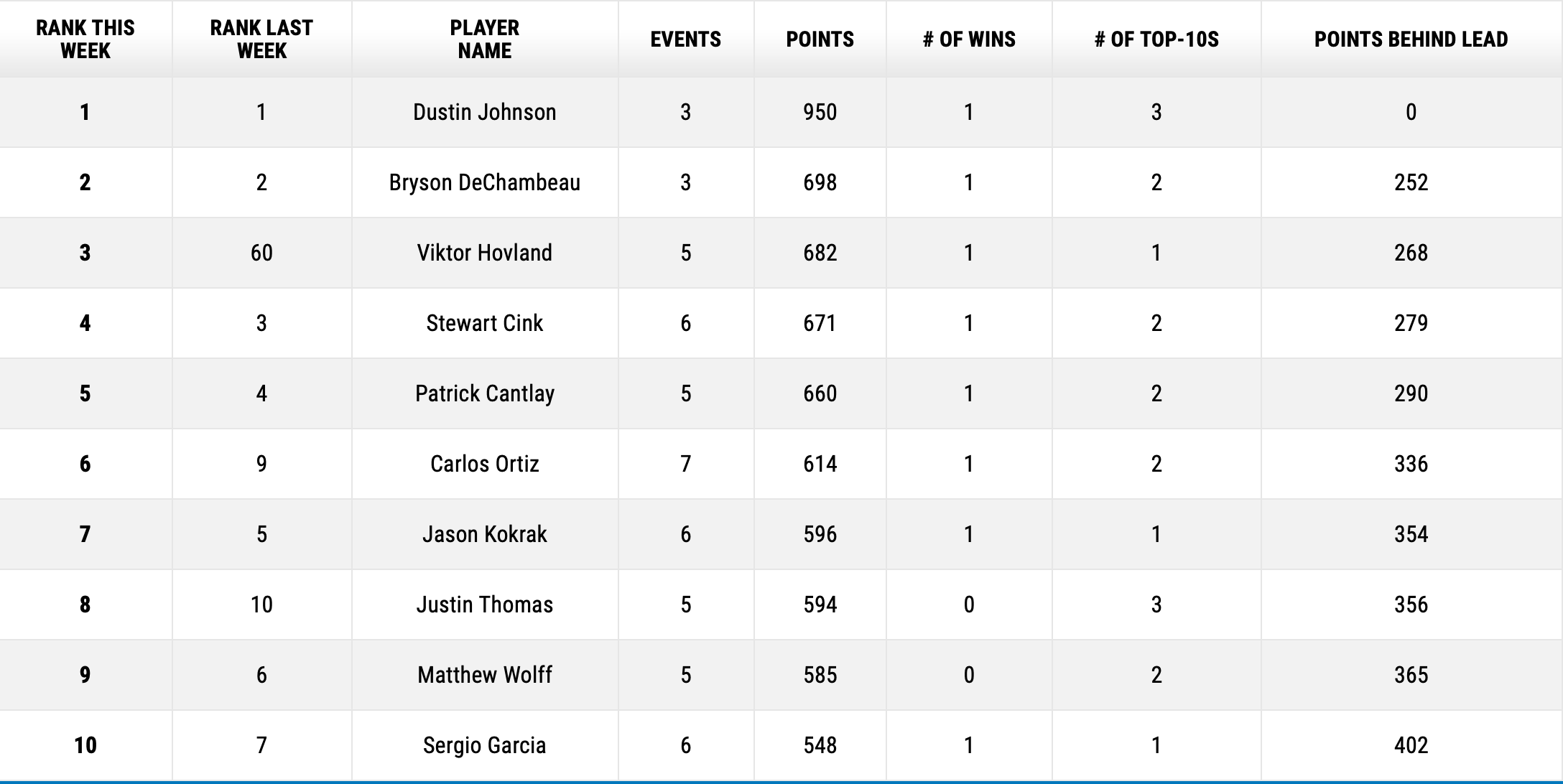 Looking forward to what the new year has to offer, the season schedule will resume in Hawaii on 14 January with the Tournament of Champions.

The Farmers Insurance Open at the end of January will most likely be the first event of 2021 that will feature most of the big-name players before the exciting Phoenix Open will take place a week later.

Patrick Reed’s title defence of the WGC-Mexico Championship will take place on the final weekend of the February in what promises to be another important co-sanctioned event with the European Tour and could have valuable points on offer in the Race to Dubai.

After the disappointment of cancelling the event after the opening round in 2020 due to the outbreak of the coronavirus, the Players Championship will certainly be one of the highlights of the year when it tees off at TPC Sawgrass in March.

On the other hand, all four Majors have been scheduled for their regular and annual time slots, which means the Masters is just around the corner and will get under way on 8 April.

The PGA Championship will be contested from 20-23 May, the US Open from 17-20 June and the Open Championship from 15-18 July before the FedEx Cup playoffs start with the Northern Trust in August.