Rickie Fowler returns to Abu Dhabi to defend his title as well as his place among the best in the game, writes WADE PRETORIUS.

It came as little surprise that HSBC would include Rickie Fowler alongside Rory McIlroy and Jordan Spieth in their plans to grow the Abu Dhabi Championships in 2016. The flashy American was on the verge of barging down the door on golf’s ‘Big Three’ of McIlroy, Spieth and Jason Day after three wins in 2015, one of which included his blockbuster Sunday finish to take home the golf’s unofficial fifth Major, The Players Championship at Sawgrass.

HSBC were rewarded with their investment when Fowler held off long-hitting Belgian Thomas Pieters by one stroke, with McIlroy and Henrik Stenson two strokes further back. That win was not without drama as the then world No 6 made double on the 7th before holing out of the bunker on the eighth to get two shots back from the demanding National Course. With McIlroy on the charge and the crowds gathering, Fowler chipped in on 17 and made par from the sand on 18 to confirm it would be his name engraved on the trophy. 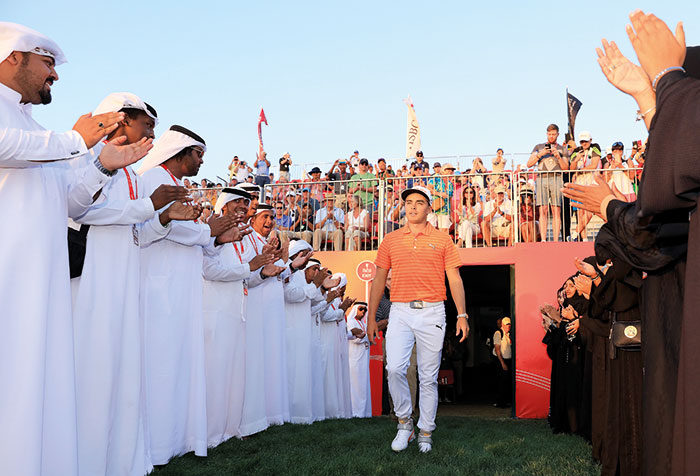 ‘This was a big one,’ Fowler said after the win. ‘Last year having a multiple-win season, to come back and work on getting back in the winner’s circle after a successful season and keep moving forward. This is a great start.’

Years of hard work, intensified after linking up with coach Butch Harmon in 2014 in order to get his game ‘Major ready’, had the California kid feeling a sense of belonging inside the world’s top 10. 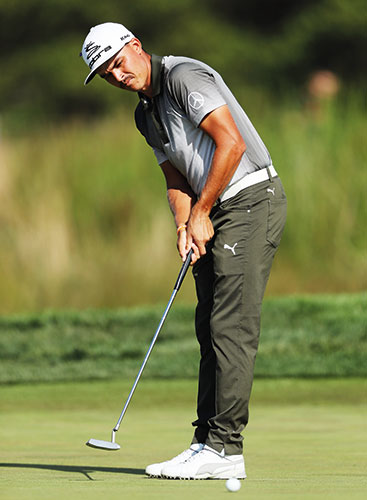 Fowler was quick to credit Harmon’s input as he became a more regular feature down the stretch on Sunday in big events as off-course fame was beginning to be matched by seeing his name at the top of the leaderboard when it mattered most.

‘Well, it’s been a process,’ Fowler told Compleat Golfer in Abu Dhabi. ‘Continuing to get better and it kind of reached a point where I felt like I needed someone to help me reach that next level, and working with Butch the past couple years, we’re just going up.’

Fowler pointed out that his regular appearances in the winner’s circle was more down to the culmination of the hard yards on the range than relief of potential finally being realised. ‘It’s definitely been a process and it’s nice to see that finally getting some wins, and making a little bit more of a habit of showing up in the media centre late on Sunday. So it would be nice to continue that and to keep going up.’

With that, Fowler conducted his winner’s duties including signing the 40-odd pin flags, his Golf Channel radio interview and some local TV work before slipping out of the media centre for some expected celebrations, a few hours sleep and then a 02:30 departure for his 18-hour flight across the Atlantic to make sure he kept his commitment to co-host a youth clinic in San Diego. 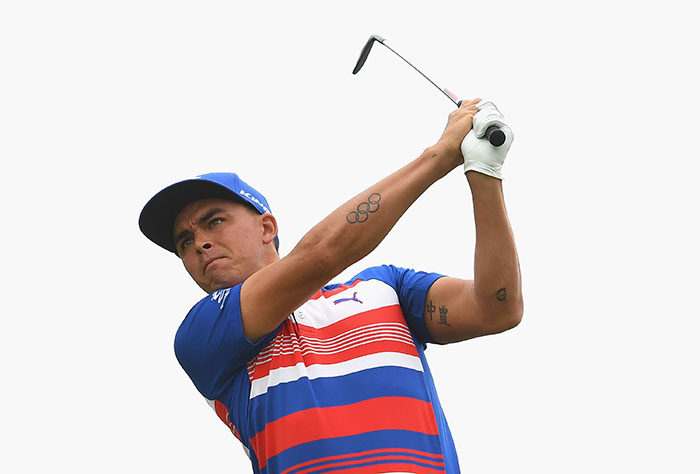 That’s exactly what you get from Fowler, one of the PGA Tour’s most prized ambassadors – a young, confident, talented golfer who is comfortable with his celebrity status and a marketer’s dream. His slick look, surfer’s tan and unmistakable Puma snapback hat were always going to have his playing record judged more intensely than his peers who arrive at tournaments without their faces on billboards littered around town.

His Abu Dhabi win moved him into the top four in the World Ranking. On the back of his run during the 2014 Majors, where he joined Jack Nicklaus and Tiger Woods as the only players to have finished all four events inside the top five, Fowler would be forgiven for laughing at those who labelled him as one of them most overrated players on tour in an anonymous poll conducted by Sports Illustrated in 2015.

And just when it looked like Fowler would be handed his card to golf’s ‘Fab Four’ with McIlroy, Day and Spieth, an errant tee shot on 16 at the 2016 Waste Management Phoenix Open saw him ultimately blow a two-shot lead to be forced into a playoff which he would go on to lose to Japan’s rising star Hideki Matsuyama.

Fowler’s 2016 numbers don’t look great – only one win, five missed cuts and an ordinary showing at the Olympics preceded his failure to make the Tour Championship field and reliance on a captain’s pick for the Ryder Cup. A former top-ranked amateur player, he spent 37 weeks as No 1 in 2007 and 2008, missed the cut at The Masters and the US Open and didn’t feature highly in the remaining two Majors before slipping out of the world’s top 10 at the end of the season, leaving Fowler pondering what where it all went wrong. 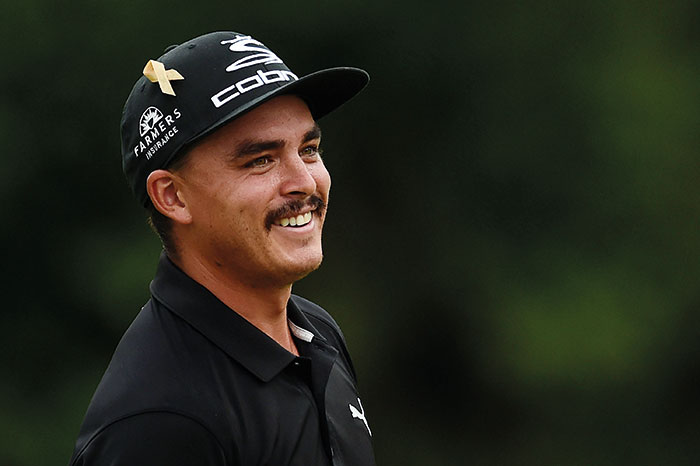 On closer inspection, few realise how close Fowler was to turning it around and finishing the year with another grandstand finish, something that has become a hallmark of the nature of his six worldwide victories. He squandered a slender 54-hole lead at the Barclays, like he had done in Phoenix and at Quail Hollow earlier in 2016, and with that blew his chance to rise to the top of the FedExCup standings with the three events to go. His Sunday 74 sent him down to tied seventh after 72 holes as he fluffed his chance at 2016 redemption as he battled an ice-cold putter.

‘It’s been a struggle ever since Abu Dhabi, not making any putts,’ said Fowler upon reflection. ‘When putts don’t go in, you don’t have that complete confidence in the putter. It kind of can start bleeding into the rest of the game.’

His struggle with the putter left his coach puzzled because of the upward trend the rest of his game was taking. ‘If you look at his stats this year they are the best they’ve been, for greens in regulation and driving it in play. He’s just putted poorly, which is unusual for him,’ said Harmon.

By the time the US Open at Oakmont rolled around, Fowler looked statistically good; he had move up 103 spots to third in greens in regulation, while his numbers across several other key ball-striking indicators were showing an improvement compared to his 2015 numbers. And while his numbers suggested he was in a good place, his results in the second half of 2016 confirmed otherwise as he posted just one top 10, in a limited field at the WGC Bridgestone Invitational, to go with his Barclays miss.

Fowler’s response? ‘Golf’s hard.’ A typically honest retort from the American who isn’t afraid to tell it like it is, just ask one of the few Twitter trolls who dares to call him out. ‘If it was easy, everyone would be out here playing and I wouldn’t have a job. So it’s just kind of fighting through it and continuing to put in the work, and it will turn back around here soon.’

Harmon, who has Brandt Snedeker and Jimmy Walker, among others, in coaching stable, is confident Fowler’s play in the 2017 Majors will be more reminiscent of his 2015 run rather than a replay of his 2016 misfortunes.

And there’s little to suggest his game won’t be ready on 19 January when he attempts to defend his title in Abu Dhabi. A strong start with the flatstick may be just the tonic required to get Fowler’s back in the groove as he continues his pursuit of the only two milestones that have evaded him so far; to add ‘Major winner’ and ‘world’s best player’ to his CV.

Despite seeing his earnings for 2016 come in at less than half of the $5.77-million he took home in 2015, Fowler has had a remarkable year off the course. Already recognised as the leading style icon on tour, he introduced high-top golf shoes on to the course along with jogger style pants and was delighted his win in Abu Dhabi would end any potential curse that playing in such an unaccustomed outfit might bring. In April, Fowler and fellow pros Jordan Spieth, Smylie Kaufmann and Justin Thomas got the social media world in a tizz with their #SB2K16 antics as the four star golfers gave their millions of fans around the world a glimpse into life beyond the course; it may both fans and the #SB2K16 fellow pros yearning for an invite to 2017’s event.

Later in the year, Thomas and Fowler then combined to create a few laughs with their playoff moustache campaign as they attempted to outgrow each other’s facial hair. And while the media still ask him as many questions about his trademark look, his cap size and his love life, Fowler is determined to continue to mix the serious business of tour pressure with the pleasures that come with being a globally recognised athlete. He wants to be known for the way he dresses, the way he plays, the way he treats people and how he stacks up as a role model, and he’s doing a good job of it across the board so far.

– This article first appeared in the January 2017 issue of Compleat Golfer.