The mantra of underpromising and overdelivering is perfect for Knysna, writes MARK SAMPSON.

South Africans selecting a location for their next golf tour are spoilt for choice. Gauteng has well over a dozen courses to choose from, while KwaZulu-Natal – from the North Coast to the South and even those further inland – has a great variety of layouts. Cape Town and the Winelands area have a spectacular array of courses. And then you get to what many consider the ultimate golf tour destination: the Garden Route.

Saturated with amazing courses, your tour could last an entire week and you will not have played all of those in the area. No doubt Fancourt, with its three Gary Player designs, comes to mind, while the cliffs of Pinnacle Point always enter the conversation. The high-lying courses in Knysna, Pezula and Simola, are an absolute treat. One course that tends to be somewhat overlooked, though, is Knysna Golf Club.

One can only speculate as to the reason for this, but what is certain is that few who play Knysna leave disappointed.

It may not come with all the frills of some of its bigger, more well-known counterparts, but just as the world has changed in the past 18 months, so too has what some tours require, expect and like from a new golf course. Ultimately it is the quality of the course, its playability and the ‘wow’ factors that will bring golfers back.

Knysna has this in spades, together with a homely and friendly atmosphere at great value for money. The relatively new general manager at the helm comes with a wealth of experience and is already raising the bar to new heights. Meyer du Toit joined Knysna in March 2021 and is making inroads into elevating the status of the course in terms of the overall experience and its playability.

Knysna is very much a parkland layout, with mature trees lining the generous fairways. Being a coastal course, the main defence of this 5,752m layout is the wind. The south-easter or north-westerly often plays a part in most rounds and amplifies the need for precise club selection and staying on the correct side of the flag.

One of the unique features of Knysna is the tidal waters from Knysna Lagoon that move through the north-western corner of the course and have a big influence on at least six of the holes. The water adds massive aesthetic appeal but puts a premium on accuracy. In total 12 holes have some sort of water feature on this flat coastal layout that is considered to be the lowest-altitude course in South Africa – in fact, large portions of the land lie beneath sea level.

The flatness of the course, although contributing to an easy walk, means the land is easily flooded in heavy rain. When the greens were relaid in 1990, they were elevated to make them less susceptible to flooding.

The club was founded in 1909 within the confines of the recreational area in Knysna. However, with the introduction of a rail network part of the course was expropriated. The first course was known as the ‘Goat Course’ due to its steep layout.

In 1935 a second course was created by the developer of Leisure Isle, George Cearn. Its flatter nature attracted the more elderly players in the area and, over time, became a popular choice. From 1930 to 1945, and in particular over the period of World War II, the original course deteriorated to a point where it closed down, with many of the members moving across to the course near to Leisure Isle.

However, due to unforeseen circumstances the course had to once again relocate to its current location. At that time the land was described as a ‘swampy, mosquito-infested area’ and construction started in 1949, with the official opening of the nine-hole course taking place in 1951. Low revenue meant cattle and donkeys were often the only solution to keeping the rough under control.

Due to the low-lying land being susceptible to flooding, a ditch was dug along the boundary of the course, along the route of the 15th hole, to redirect water back into the lagoon. In 1968 the town council agreed to an expansion to a fully fledged 18-hole golf course.

In 1995, a complete overhaul of the greens began, with the surfaces being raised and bentgrass introduced.

The course has a number of notable holes, many of which seem to be on the back nine, taking advantage of its proximity to the Knysna Lagoon and with breathtaking views beyond Leisure Isle. Many of these holes are where the tidal waters of Knysna Lagoon flow through, adding to the spectacular beauty of the area and its uniqueness.

The par-five 3rd is the first hole where the water comes into play. At just 448m it isn’t long, but going for the green in two while negotiating any kind of crosswind is not for the faint-hearted. Water all the way down the left side of the green and a bunker to the right make the putting surface a rather intimidating target.

The par-four 6th is a daunting hole at 371m. Often playing into the wind, it means a driver is needed off the tee. At the same time, accuracy is vital since water flanks either side of the fairway along the entire length of the hole. A bunker left of the landing area must also be avoided. Bunkers also protect either side of this stroke one’s large, two-tiered green, making it a difficult target with a long-iron.

Some respite follows with the shortest par four on the course at only 262m. Next is the 8th, which is notably one of the prettiest holes, thus earning the ‘signature hole’ accolade.

The back nine winds its way towards the lagoon before heading back to the clubhouse. The 10th, at only 332m, is not long but a lateral hazard along its right side must be avoided. The 11th through 13th are very strong holes and can make or break your round. The 11th is rated the second-hardest hole on the course. Although it occasionally plays downwind, it becomes a lengthy 367m when played into the wind, requiring two good hits. Greenside bunkers left and right protect the putting surface and water encroaches on the left. The two-tiered green makes for a challenging two-putt.

The 12th is another strong par three at 175m. The green, like the 8th, is also surrounded by water and is ‘pinched’ in the middle, resulting in an hourglass-like shape, with bunkers on either side. This, together with its diminutive size, means it is an elusive target when the wind is up. The raised green also falls away steeply and anything long may well be water-bound.

The longest par three on the course is followed by a long par five. At 460m, the 13th is not the longest hole – the 16th is 505m – yet the water hazards contribute to its stroke-eight rating. The undulating fairway snakes its way to the elevated green, which lies almost perpendicular to an incoming fairway, creating a very narrow target with a long-iron in hand.

From the par-three 14th in the south-eastern corner the course slowly winds back up to the closing par-four 18th beside the clubhouse.

Knysna has all the charm of a small-town course, with the homely feel you come to expect from your local municipal layout. Its no-frills approach comes with greenfees that are hard to beat in the Garden Route precinct. From the clean, modern clubhouse and dining area spilling out on to the well-maintained course, the entire experience will leave you wondering how this gem has managed to be kept so well hidden. True, the Garden Route’s cup runneth over when it comes to golfing options, but it will be hard to beat Knysna’s value for money and playability.

The honour of being the signature hole at Knysna Golf Club is hotly contested. While it is generally agreed that the par-three 8th is the winner, a number of other holes, such as the 12th and 15th, are close contenders.

At 148m the 8th is, at face value, an easy hole. That is until you take into account the fact the large green is surrounded by water, its surface slopes dramatically from back to front, a bunker right awaits any stray shot and a crosswind comes into play more often than not.

According to general manager Meyer du Toit, it is an incredibly challenging hole that, despite its length, should not be underestimated. It is also located in a corner of the course where a number of large trees grow, with the result being a swirling, unpredictable wind that makes it difficult to gauge its strength and direction.

Meyer adds that the deeper you go into the green the wider it gets, and there is more space over the back than front. There is no real bailout area on this hole, with anything short culminating in a watery demise. Slightly long will at least allow for a chip and putt possibility. In other words, don’t under-club. For most golfers, a solid 7-iron will most likely do the trick. However, if the wind is up, rather opt for more club and swing easy to keep the ball below the wind.

Regardless of pin position, the middle of the green is the smart play, allowing for a two-putt par. Its stroke-11 rating on a still day is acceptable, but with any wind about, don’t think this pretty hole is easy. 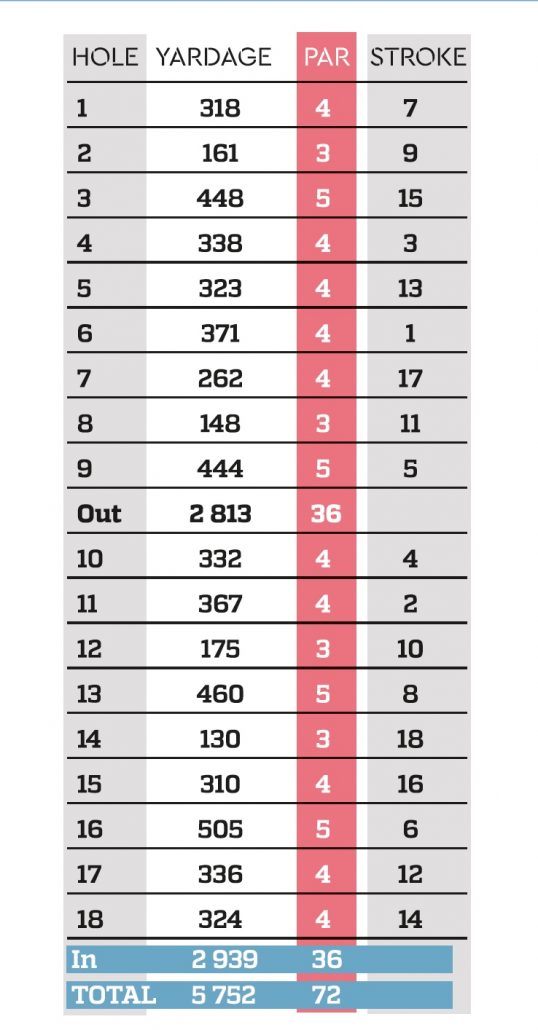 As you exit Knysna on the N2, in the direction of Plettenberg Bay, take a right along George Rex (signposted to the Heads). Go through the first set of traffic lights at Vigilance Drive and then take the second left turn into Howard Street. Follow the road for approximately 1km and the clubhouse, with parking lot, will appear on the right.

Gary Lemke Column: Golf rankings becoming meaningless
There is no point in having an ‘official world ranking’ if all golfers aren’t going to... END_OF_DOCUMENT_TOKEN_TO_BE_REPLACED