The KwaZulu-Natal Midlands is about to get its first 18-hole golf course as Gowrie Farm expands, writes ANDY CAPOSTAGNO.

Cowrie Farm has entered the second phase of its development, with 29 new stands, averaging 1,800 square metres, available, ranging in price from R1.5-million to R2-million.

These stands are sited among seven holes now under construction that will transform the course from 12 to 18 holes. The course designer is Gowrie’s developer, Guy Smith, with a little help from new Gowrie share-holder, Dale Hayes.

The new holes will occupy land alongside the R103 as it approaches Nottingham Road, opposite the local landmark, Rawdons Hotel. The course will be rerouted, with the 11th hole becoming the 2nd and the new holes numbering 3 to 9, with a halfway house due to be constructed at that juncture.

Hayes says that the new 3rd has been designed with the 17th at St Andrews in mind.

‘We haven’t got a hotel for you to drive over, but we’ll plant trees there,’ he said. ‘The green will be as close as we can get to the 17th with a pot bunker guarding the front and we’re even going to build a wall to the right of the green. And as with the original, the tee box for the next hole is a continuation of the green.’

The new 4th and 5th, both well-bunkered par fours, snake around 12 of the new plots and then golfers will cross the road to play a par three over the river which supplies most of Gowrie’s dams.

The 7th will be a brutal 550-metre par five leading up to the large dam behind the current 4th hole, then the players will turn at right angles to play the dogleg-left par four. The new 9th hole is a short par four and after a breather at the halfway house, the old 3rd hole is the new 10th.

The land has already been cleared and staked and Hayes is hopeful that construction work will be finished by the end of 2023, with the opening day coming sometime in 2024. Gowrie will then become the first 18-hole course on the Midlands Meander, 40 minutes north-west of Victoria Country Club and an hour southeast of Champagne Sports Resort.

Until then, the 12-hole layout, consistently rated among the top 50 courses in South Africa, remains open and in excellent condition. If you haven’t played it, time to fix that and here is a guide to Gowrie as it was when we went along to the course.

1st Hole: Par 4 – 370m
Stroke 7. Dogleg right with out of bounds all the way down the first half of the fairway. Big hitters can aim over the bunker on the right corner and approach the raised green with no more than a wedge. The rest of us aim left and hope that the ball doesn’t veer right. A wetland 50m short of the green gobbles up an errant second shot.

2nd hole: Par 5 – 467m
Stroke 11. Dogleg left where the big hitter can get home in two. Three bunkers gather up the shorter driver who needs to carry the wetland off the tee. The pragmatic shot is right of the first bunker, with a 3-wood second and short-iron third to another raised green.

3rd hole: Par 4 – 417m
Stroke 3. A downhill out of range for the average golfer, especially into the trademark Gowrie wind. The best line into the green is on the right of the fairway, but that’s where all the trouble is, with six bunkers hugging the side. The sensible line is to aim at the bunker on the left, which is about 250m from the tee. The green inclines dramatically from front to back, setting up some nerve-tingling putts.

4th hole: Par 3 – 113m
Stroke 15. A great short hole where the wind dictates the choice between a lob wedge to 7-iron. Being in the cavernous front bunker almost guarantees bogey or worse, and if you hit it long, the sloping fringe sends it to a watery grave.

5th hole: Par 4 – 418m
Stroke 1. Uphill into the prevailing wind with trouble down the right-hand side where the land slopes into one of Gowrie’s huge dams. A cluster of bunkers 50m short of the green awaits the faint-hearted, while a severely undulating putting surface challenges the long hitter after finding the green in regulation.

6th hole: Par 4 – 329m
Stroke 17. Short dogleg left, a great risk-and-reward hole. The big hitter can carry the bunker on the left of the fairway and hit the green with a wedge. For others, the option may be a 3- or 5-wood, leaving a short-iron to a large green with multiple flagging options.

8th hole: Par 3 – 167m
Stroke 13. The raised tee makes the hole shorter than the yardage tells you, so beware of hitting it long. The trouble is in the greenside bunkers on the right and over the back. A hole where you can watch your ball climb majestically and fall precipitously.

9th hole: Par 4 – 278m
Stroke 5. Don’t believe the tee-box markers. Hit it as far as you can and then stand over a knee-knocking second across the water. The faint-hearted will rejoice when this hole disappears when the new layout is open for play.

10th hole: Par 4 – 389m
Stroke 10. A blind tee shot over the stake will give you the same shot as on the 1st hole, with an additional 30m to the green. It is harder to hit your ball out of bounds than it is on the 1st, but also easier to find yourself in the bunker right at the corner of the dogleg.

11th hole: Par 3 – 179m
Stroke 18. A long shot to a narrow green. Better to be longer than in the front bunkers, but easier said than done if the wind blows.

12th hole: Par 4 – 403m
Stroke 2. A long, straight tee shot should leave you with about 150m to the green. Back in the real world, this is a three-shotter for most as it is uphill all the way.

13th hole: Par 5 – 465m
Stroke 14. This is the 3rd, played 50m longer. If the wind is at your back, it is a genuine eagle chance for the gorillas, a forgiving three-shotter for the rest of us. A semi-circle of greenside bunkers provides protection for par.

15th hole: Par 3 – 142m
Stroke 16. A hole you don’t play on the front nine is a short-iron off the cliff face to a well-bunkered green far below. Stay away from the water all the way down the right-hand side.

16th hole: Par 4 – 374m
Stroke 8. A good drive will get you to the crest of the hill and a clear shot to the green. Aim at the bunkers in the distance, take a deep breath and hit it as hard as you can.

17th hole: Par 3 – 172m
Stroke 12. The 7th green which was at right angles to you then is now a long, thin mirage. Anything right will trundle into the collection area, anything left needs prayer to let the ball hit the bank and slide between the bunkers on to the green.

18th hole: Par 5 – 496m
Stroke 6. Only the biggest hitters can contemplate the green in two, needing a 300m drive that brings the water into play. The average golfer is normally reduced to a gibbering wreck, needing to play both second and third shots over sprawling dams. If you make par here you deserve the best that the 19th hole can provide.

Phil Simmons is the master professional at Gowrie. Until the arrival of Garrick Higgo, Phil was regarded as South Africa’s finest left-hander, noted particularly for the distance he hit the ball. Phil was the head pro at Germiston GC for 29 years, then relocated to KwaZulu-Natal for a 15-year stint at Mount Edgcombe. After three years at Randpark, he came to Gowrie and is overseeing the course at the most important time in its history.

‘When you stand on the tee you have to ask yourself the question: if you’ve got the power, is it worth taking on? I’ve tried it a few times and I can tell you it’s not worth it, but the youngsters like to have a go and sometimes it comes off, but more often they walk off with a double drop.

‘For the average golfer, this is probably a rescue club off the tee and a wedge to the green, depending on where the pin is. If you hit it too far and the pin is at the back, you haven’t got a shot. If you don’t hit it far enough it brings the bunkers into play. Gowrie is known for its bunkers. There are bushes in some bunkers and you can lose your ball in one if you’re unlucky.

‘What changes this golf course every day is the wind. We call the 4th hole the toughest par three on the course. It’s 113m long and I’ve hit everything from sand-iron to 7-iron there.

‘What’s tough about Gowrie is the Cynodon grass on the aprons. If you miss the green by a metre you can end up 40m away, unlike on a normal Kikuyu course where the ball would stop and spin. The 7th is a classic example and you have to learn to miss in the right place because if you short-side yourself, you’re dead.’ 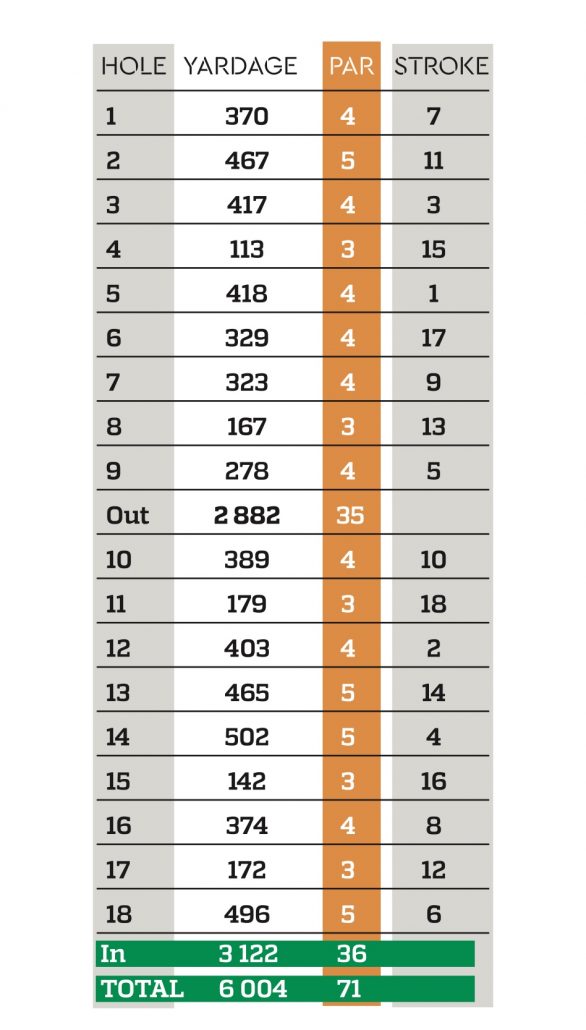 From King Shaka International Airport, get on N2 from M65. Follow the N2 and N3. Take exit 132 from N3. Drive to your destination.

Situated on the R103, Nottingham Road in the KZN Midlands 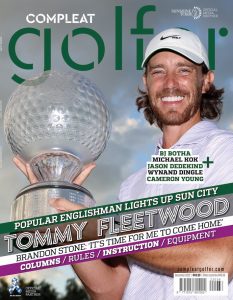