Let’s get one thing straight: surfing, not golf, was the sport that put St Francis Bay and its neighbour Jeffreys Bay on the map. Canadian moviemaker Bruce Brown filmed the wave today known as ‘Bruce’s Beauties’. When his film, The Endless Summer, was released in 1966, surfers from all over the world flocked to ride the famous wave and today St Francis Bay and Jeffreys Bay are the highlight of any African ‘surfari’.

But there are golfing highlights aplenty in the area too: St Francis Links is rated the fourth-best course in the country. But here’s a little secret: the older St Francis Bay Golf Club has a different golfing experience to offer, and it’s a great one.

The story of St Francis Bay Golf Club has its origins 400 years after Manuel de Perestrelo, a Portuguese explorer, weighed anchor in a sheltered bay in 1575. He was struck by the natural beauty of what he saw and named it Bahia de Sao Francisca after the patron saint of animals and ecology, St Francis of Assisi.

In 1954 a new adventurer, Leighton Hulett, paid £1 750 for the farm Goedgeloof and moved there from KwaZulu-Natal with his young family. The land was not suitable for farming so in 1958, to supplement their income, he established a rough fishing camp for visitors. As time passed, more people, mainly from Port Elizabeth and Uitenhage, bought land from Hulett and built holiday homes. He insisted on rigid control of building designs, allowing only homes with white walls and high-pitched black thatch roofs. In 1976, when the Humansdorp Divisional Council became the controlling authority, they entrenched these controls in the local bylaws.

Just a year earlier, Hulett transformed part of the Sea Vista area – situated to the south of where the River Kromme reaches the ocean – into a nine-hole course designed by Robert Grimsdell. It was for private use but has incurred dramatic changes, and a further nine, added at the instigation of Maxwell Hulett by Danie Obermeyer of Golfscape, resulted in the 18-hole layout it is today.

It opened as an 18-hole course on 22 December 1999. The original layout – due to the land constraints – had five par threes and five par fives with a par of 72. Later the 2nd hole was converted to a par four and the par is now 71.

The links-like fairways are laid out on gently undulating, sandy-soiled terrain, and dense patches of coastal fynbos line many of them. Greens are mostly lightly bunkered and relatively small. Four of the holes – the short par-four 11th to the par-five 15th – are routed close to the coast on a separate patch of ground.

What exists today is a wonderful challenge that isn’t so long that it takes away the feeling of playing golf for a holiday, but stern enough to make you put your thinking cap on as you step on to every tee. And, of course, there’s the 19th hole with its delightful bar, staffed with sympathetic people of good humour, where you can relive the round or talk about what you would do differently next time.

One of the great pleasures of the course is that you get to play five par threes, and each one presents a different challenge – besides being visually appealing.

The 3rd hole is the first of those. At 170m off the back marker, it plays a little longer than it looks, so it’s important to have the right club and find the centre of the green. There are greenside bunkers left and right and the green has a ridge across it, allowing for a two-tiered green to make a two-putt par a little more difficult.

The 8th is a little beauty. At 130m off the back, it plays over a dam, so it requires you to carry the ball all the way to the green. The dam hugs the green left and right, so it makes sense to aim for the centre of the green. It you’re going to go long for safety, a bunker at the back-centre of the green ensures you’ll have a challenging shot back facing the water.

Then you start your back nine with a downhill par three in front of the clubhouse over 156m. Bunkers protect the green front-right and left and back-left with the 18th fairway bunkers also coming into play for a bad tee shot that is left and short. The wind generally blows across this hole which makes hitting the green challenging. And if you go right, you’ll be game for comments from the balcony of the coffee shop there.

The longest of the par threes on the back nine is the 14th. Nestled in the back corner of the course, it’s more difficult than it seems at 163m. A long-iron off the tee makes the green difficult to hit but, with no greenside bunkers, a chip and putt isn’t too difficult. Take your par and move on.

And, just before you head for home, there’s the downhill 136m 17th. It shows its teeth when playing directly into the wind. The wind direction can make it a short- or a long-iron on different days. The green is protected by bunkers left and right and has a larger top tier and smaller bottom tier. On a calm day, it’s a good hole to make an encouraging birdie to set yourself up for the 18th.

The closing hole is challenging enough to get your juices flowing but, with forethought and a little good luck (as well as being straight), you can pick up a closing birdie. It’s a 438m par-five dogleg from right to left. The landing area is protected by trees left and right and the dam on the left is reachable for the longer hitters. The dogleg comes into play with your second as there are fairway bunkers in the left rough of the landing area which are hidden. A short-iron for your third into a big green will leave you with a birdie putt to please the other golfers watching from the clubhouse above.

Another par five that will get your attention is the 15th, the longest of the par fives at 480m. The hole runs along the road which makes missing right a pretty scary prospect. There’s plenty of space left off the tee, but that way does leave you some thickish rough and quite some distance to negotiate.

The green is elevated and anything coming up short will roll back a good distance, while those short and right will roll back into a deep bunker, making an up-and-down extremely difficult. The green has two tiers and the bottom tier slopes sharply to the front of the green.

A par on this hole feels great.

Of the par fours, perhaps the most satisfying is the shortest, with one of the best tee vistas in golf in South Africa. The 13th, coming as it does after the demanding signature 12th, gives great pleasure. Get the camera ready as you walk up to the tee box from the 12th green. From the back of the tee you look out over the ocean and bay of St Francis, and a selfie or a fourball shot is de rigueur. At just 295m, it still requires an accurate drive to avoid the ubiquitous Eastern Cape coastal bushes. Downwind, the longer hitters can take it over the left bush and have a go at the green, which is shared with the 11th, so aim at the left-hand flag and keep out of the greenside bunkers on the right.

That bush is part of the attraction of St Francis Bay. The layout is very easy on the eye, and the turf feels really good underfoot as well as through a shot off the fairway. Of course, the rough is exactly what it’s supposed to be – penal – but, despite that, the course never feels as narrow as it seems. There always seems to be space to bail out.

That’s what makes this such a terrific holiday golf course. There’s also so much to do after you’ve worked up a sweat on the fairways: swimming, surfing, windsurfing, sun-tanning, body boarding and wave skiing.

The town is filled with places to stay, and the course should be a fixture on any golfing trip to the area, providing, as it does, such a lovely contrast to St Francis Links. There’s the annual competition for amateur golfers every September called the ‘Calamari Classic’. The three-day event now attracts an entry of more than 250 men and women from all over the country.

So, next time you’re in the area, and a relaxing round is on the agenda, don’t miss the opportunity – especially on a windless day! 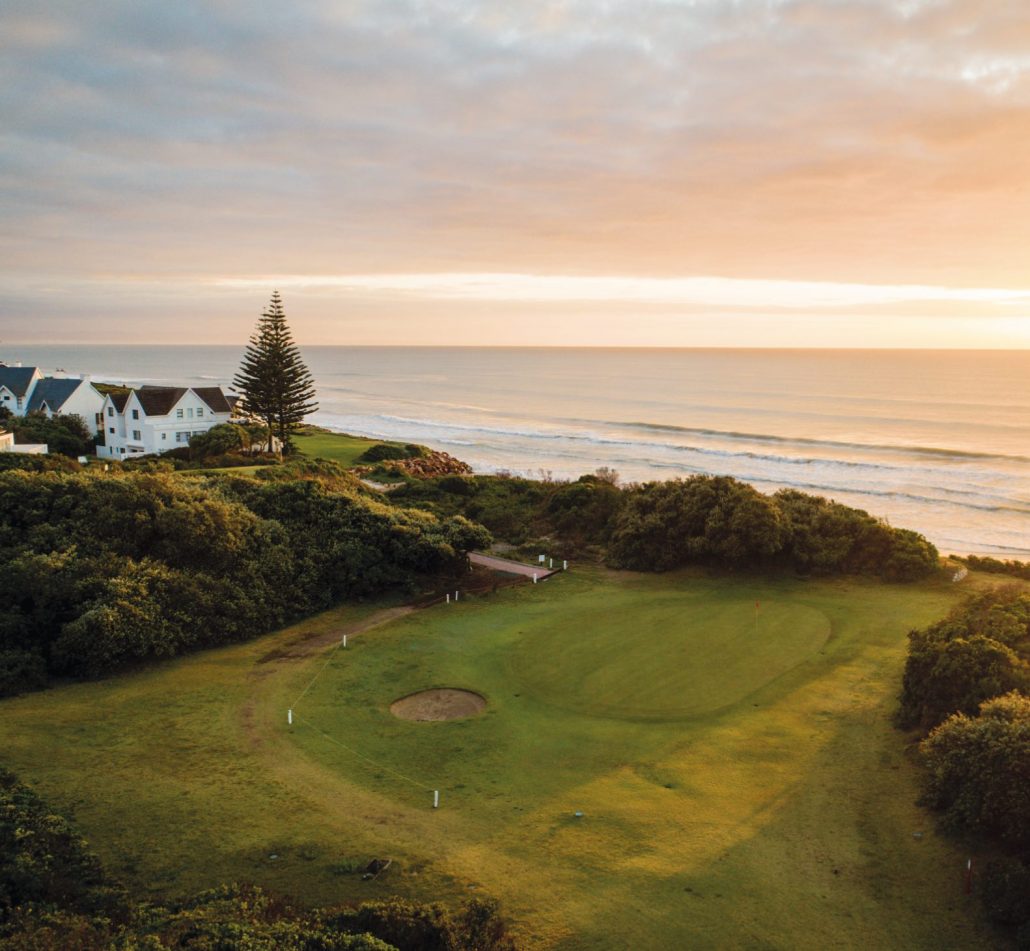 The signature hole is a short par four, playing 301m from the club tee marker. But, says golf manager Justin Roux, don’t let the distance fool you. ‘This is an extremely difficult short hole, as can be seen by its stroke rating: it is the fourth-hardest hole on the course.

‘Playing down to the sea, it needs two good shots to hit the green. Take a long-iron off the tee to ensure you are in the middle of the fairway and you will be left with a short-iron into the hole.

‘For the braver golfer, the longer the club and the more up the right you aim, the closer you can get to the green. If you can carry about 230m and be accurate enough to feed it through the bottleneck of bush, it will release down and run up to the green. The risk of going big, though, is there is bush all up the right side of the hole. The safe play is always the better option here.

A tee shot too far left will feed down the bank close to the bushes making your second shot blind over the dune.

‘The dunes close in at the end of the fairway 230m off the tee, leaving a narrow gap for you to play through to get to the green. Being a coastal course, the wind plays a major role in making this hole so good. Depending on the wind direction, you could be hitting a 5-iron off the tee and a wedge into the green or you could be hitting driver off the tee and a long-iron into the green – two completely different holes with and against the wind. There is more space on the left of the green so that is where to miss the green, but don’t get caught out by the front-left bunker. The green slopes down to the sea but is relatively flat, without any undulations.

‘After your putt, make sure you take in the view as there aren’t many greens in South Africa that are so close to the sea.’ 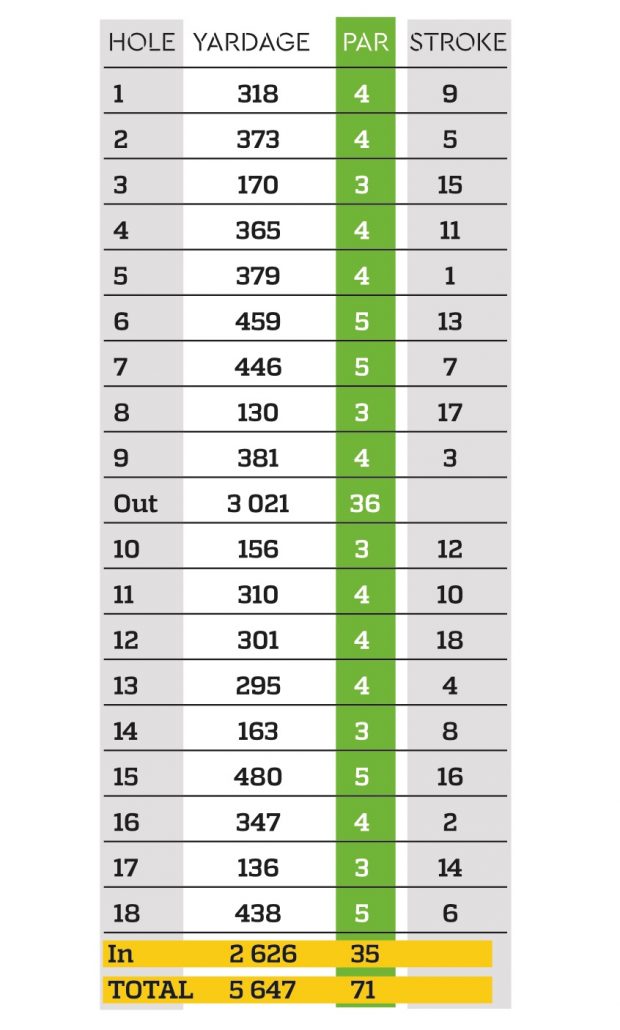