It’s clear as day that the Zurich Classic of New Orleans will serve as ideal preparation for International Team captain Ernie Els and a number of Presidents Cup hopefuls.

One pair this week – Adam Scott and Jason Day – will be desperate to put on a show as they seek a long-term partnership in team events.

‘I think we’re a hell of a team,’ Scott said. ‘I don’t care who else is on the team and what team we’re playing. I think who we play has to turn and take notice of us.’

Els, playing with one of his assistants, Trevor Immelman, has been working behind the scenes to get potential pairings together for the week, with Scott revealing that his wishes to play with Day in the past have been turned down.

With the Presidents Cup back in Melbourne, a course Scott knows better than anyone else teeing up, an all-Australian glamour pair seems likely.

‘I’ve tried to push for it to happen more often, but there’re a lot of different opinions and things to happen.

‘You know, you have to play as a team member and do what’s best for the team, but I would definitely push for this pairing, certainly in Australia. I think it’s very formidable,’ said Scott, who won the World Cup with Day back in 2013. 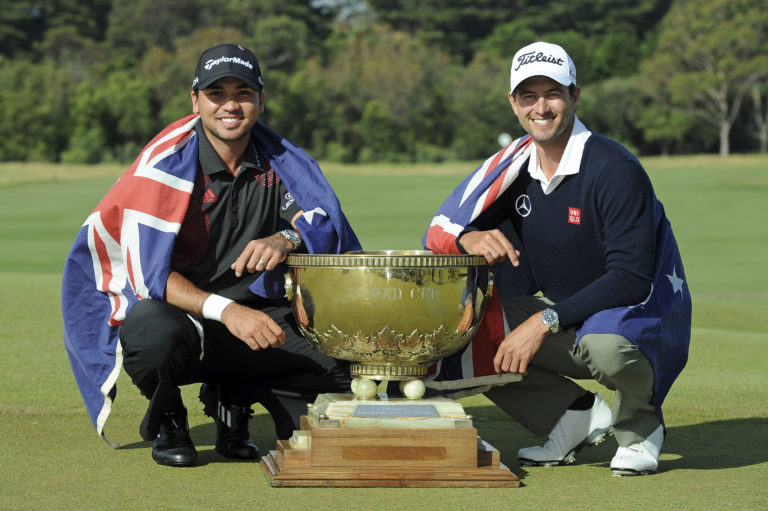 Day, who has played with Rickie Fowler and Ryan Ruffels at TPC Louisiana in the previous years, admitted that he’s ready to join forces with Scott, both here and back home in December.

‘If me and Scottie play together for the rest of the Presidents Cups that we play in, I’d be over the moon because I think it’s a good pairing,’ Day said. ‘But I understand where the captains, where their heads are coming from, just because it’s a tough decision to make with regard to putting guys together.’

Day is eighth in the current International Team standings, with Scott back in 11th. The top eight after the 2019 TOUR Championship will get invites, with Els able to make four Captain’s picks after that.