In this Compleat Golfer magazine series, PGA professional GRANT HEPBURN demonstrates some of the key concepts in generating more power in your golf swing.

Having proper hip movement is absolutely crucial when it comes to hitting the ball consistently, as your hip movement can have a severe impact – positively and negatively – on the other parts of your swing.

In this instruction feature, I’ll demonstrate how engaging your hips on the downswing helps them to lead the shoulders and arms into impact. This can help you maximise your swing speed and generate extra power and distance.

Your hips need to turn in the swing and this movement is a key part of adding power to your golf swing.

In this swing sequence I’d like you to pay special attention to the patch on my left hip, as this will help you understand the correct movement of this hip during the golf swing and how it can help you generate power in the swing.

In the backswing, note how my hips turn and the patch on my left hip moves in response to the coiling of my hips. This full hip turn allows my shoulders to make a maximum turn too, which adds even more loaded power to the backswing.

Now, in the downswing, the hips need to unwind. The key here is that they need to move slightly laterally as they begin the process of unwinding. Once the lateral motion has taken place, it is vital that the hips unwind in a way that sees the left hip turning ‘up and around’. When the left hip does this, it drops the right side into a position where the shoulders and arms can fall into the correct path coming into the ball. The rotational force of the hips can then be taken full advantage of as the shoulders and arms follow their lead.

Through the hitting area, the left leg will straighten to brace for impact and you will see that the left hip patch is now clearing ‘up and out of the way’. The right side is now free to move with great speed into the followthrough. This correct hip motion creates tremendous rotational force in the right sequence and position, which translates to power.

It’s important to note that the slight lateral movement to the left of my hips at the start of the downswing is not a hip slide, which would occur if I moved too far towards the target, which limits my ability to uncoil.

In this sequence I’m demonstrating what happens when you spin your hips open too early. 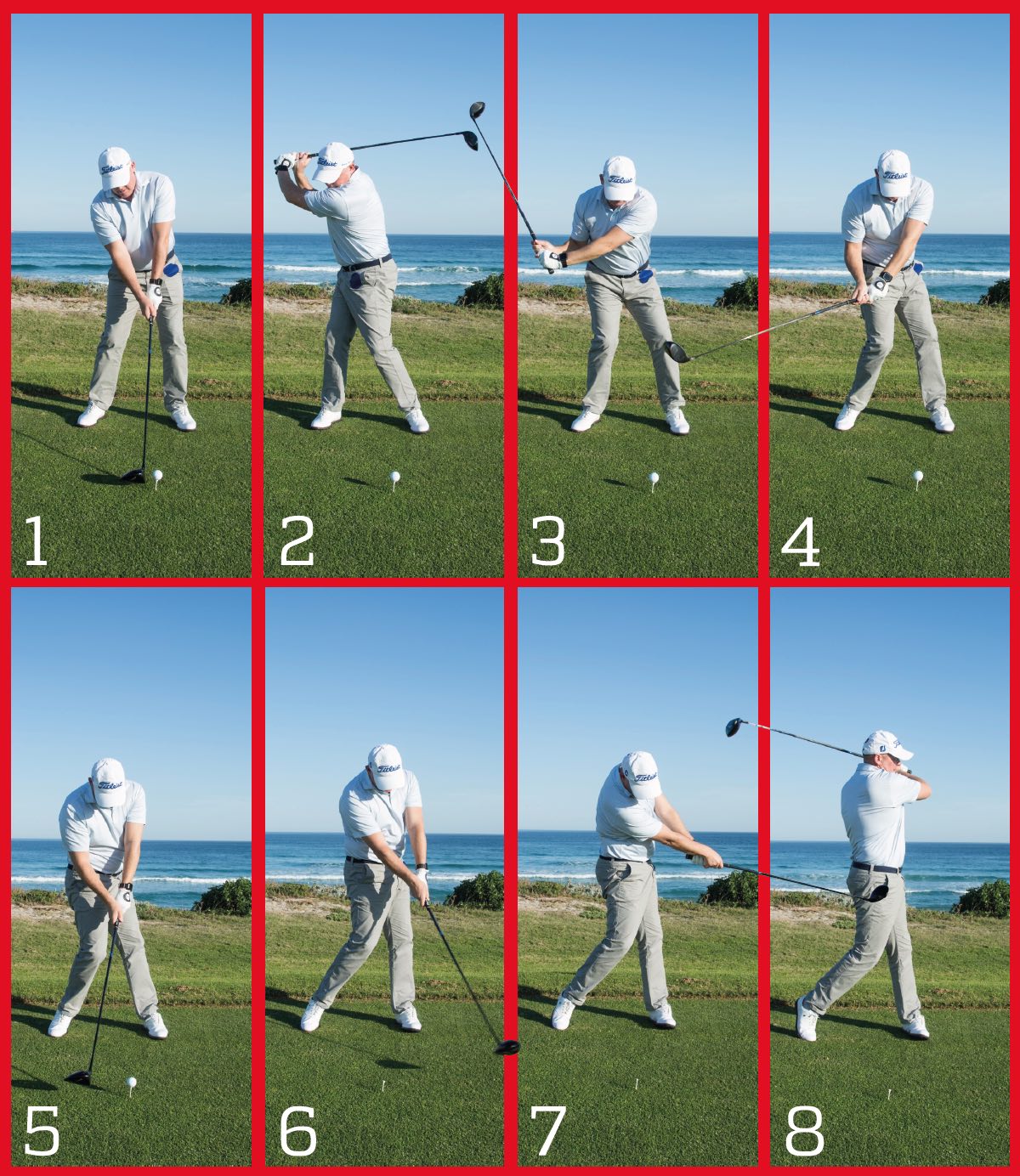 Notice how the patch on my left hip has spun around the corner before it has had the chance to move laterally. By trying to clear my hips too early, before I have shifted my weight to the left side, the left hip clears low and left. It drags my right shoulder and hip around with it, and that in turn forces my arms to swing out and away from my body for an over-the-top, steep swing path that cuts across the ball and has little consistency, accuracy or power.

To get a good feeling for how your hips should move in the golf swing, I like to use this simple golf drill. 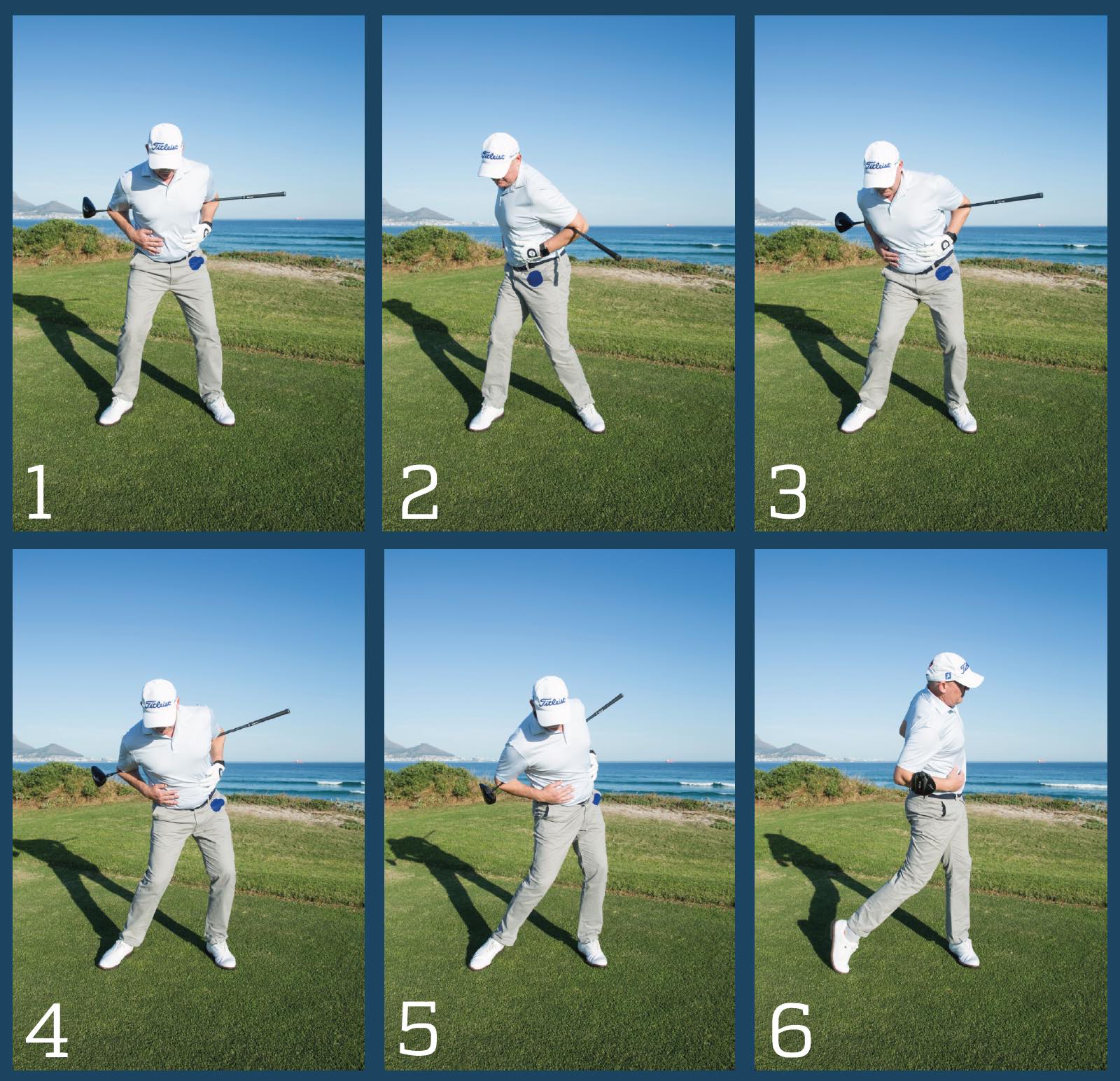 Start by placing the club behind your back, as I have done. Now mimic a swing and keep an eye on the shaft of the club as you swing, as it provides a good visual indicator of how your hips need to move in the swing.

In the downswing, ensure the left side of the shaft is higher than the right as you move your weight left and clear your left hip upwards and around.

– Hepburn has been a regular face in Compleat Golfer for more than a decade. His CV includes time coaching on the European and PGA Tours, and an impressive list of top amateurs and pros. He is the CEO of Golf RSA and the South African Golf Development Board. Follow him on Twitter @granthepburn.