You’ll be hard-pressed to find a better mix of golf and outdoor adventure than at this Sun City jewel, writes WADE PRETORIUS.

Bucket lists are important, perhaps more for achieving life goals than ticking off new golf experiences. But a trip to a destination that uses ‘a world within’ as its catchphrase would not be complete without a round at Lost City Golf Course.

You would be forgiven for doing whatever it takes to play Gary Player Country Club – it remains the holy grail for most South African golfers and for tourists. It is steeped in history – it turned 40 this year – and continues to attract European Tour interest with an ever-improving purse attached to the penultimate stop in the season. But for those who have played the Black Knight’s design and never ventured next door, you should be kicking yourself.

It is a most enjoyable experience and it won’t leave you feeling beat up in the way its big brother inevitably does. There is no fiendishly difficult 8th hole to navigate and while the bent-grass greens remain every bit as quick and complex, they have a more manageable feel to them and are often bigger too, which makes your misses slightly less punitive.

The clubhouse is built with a Zimbabwe Ruins theme but there’s nothing rustic about it. The Crocodile Lounge offers a relaxing stop to your round and the attentive staff are every bit as good as the expert caddies on hand to ease you through the day.

The course, opened in 1993, is a testimony to what can be done when your resources match a creative eye; blending a championship golf course into the undulating bushveld that borders the Pilansberg National Park. The product is a layout that covers 100 hectares, including 28 000 square metres of water features that provide a home for not only the crocodiles from the iconic 13th hole, but also a wide variety of fauna and flora.

It is a course that offers panoramic views at almost every turn with more than the occasional spotting of wildlife. Fortunately, only the smaller variety of animals get close to the action on the fairways. It’s a golf outing for the senses and is maintained to perfection.

The 1st hole is a gentle start at just 352m played straight in front of you – bearing in mind that while most players
will be boosted by the effects of playing at altitude, your putting will be tested on the three-tiered surface.

The 2nd is your first low-stroke encounter and a misdirected drive will let you know why. A waste bunker lines the right flank and any overcompensated shot to the left will leave you needing something special to make the green in regulation. The putting surface is guarded by a bunker to the right, so you’d be better off trying to hit it long, depending on the pin position.

The 3rd is a gem of a par three and at just 165m off the club tee, there is reason to believe a birdie is on the cards. But there is water short of the bean-shaped green and, if you go long, two well-placed bunkers almost always prevent a simple up-and-down. It’s a hole that often trips up even the best of players.

The stroke 18 follows and only the big hitters should aim down the left to take the riverbed out of play. The short hitter, or the more conservative player, will take a long-iron off the tee aiming right of the generous fairway.

After a short par four, the 6th is a standout hole with a blind tee shot. If your tail is up, it might be time to calm expectations and take some good advice off the tee. The brave will take a driver and cut the corner but this shot only rewards precision. With only 347m to the hole, a mid-iron to the left corner and a wedge up the hill will help take the bunkers that litter the right side of the green out of play.

The 8th is your next short hole, playing down to the green with bunkers short right and long left. It is a picturesque setting as you look towards the clubhouse and the resort in the distance. Breathe in and swing easy as you watch your ball float down.

Closing out your nine is a par four that has no margin for error. Water runs down the left all the way to the green where it meets a waterfall. With a hazard to the left and a treacherous group of bunkers to the right, you’ll need one of your best iron approaches towards the back of the green. A par is the reward for four good shots; it
is the stroke two after all.

The back nine starts with a short but intricate par four that requires an iron hugging the left before you play up to a wide green. The pin is often tucked way on the left with bunkers guarding it short and long. Only big scores follow if you are a little heavy-handed with your approach. It is a thinking hole and one that further advocates for the use of the local caddies.

Few courses in the country can offer the type of caddies who call Lost City their home. The wayward player will
enjoy their tenacity in trying to retrieve your golf balls, while the lower-handicap golfer, no matter his green-reading prowess, should heed the tips offered up by his looper. They will either be saving you money or shots.

The best par five on the course follows after you trek up to the tee perched atop a small hill. It is another tremendous viewing point. Big drivers will take it well to the right of the bunkers that cut into the fairway while a fade off the tee works well for those who are playing it as a three-shotter. The entrance to the green is narrow from the left and has bunkers well-placed to the right.

The next is a short par four that slopes up and to the left and offers a good chance of birdie before you encounter the crocodiles of the signature par-three 13th.

The next hole brings you back down to earth, metaphorically speaking, as you play a long par four that demands two of your round’s best shots. The tee shot is played to a blind landing area and your second is also unsighted as you play up the hill to a green that slopes from back to front.

The par-three 15th is magnificent as it plays towards a large green over a ravine on the border of the game reserve. Take your time in selecting your club as elephants have been known to watch from the adjacent hill.

The closing stretch is as good as any with two low-stroking par fours and a par five to close. You cut a corner of natural vegetation from the elevated 16th tee, but go too far right and you’ll need a provisional. The tee shot is just one factor to consider for the T-shaped green presents bunkers on either side. It’s a hole that favours a big hit off the tee to allow for the shortest possible approach but again, don’t get overly greedy when picking your line.

The penultimate hole is the stroke one and offers little in the way of comfort as you look up to a small landing area to aim at. Bunkers protect the right, so a small fade is useful. Like most holes, a successful drive is only one part of the play as a tiered green – from back to front – offers a variety of pin placements. A pot bunker is another concern on the left, while missing long is not an option. Going long and straight, however, will help you close out your round in style as you look down towards the clubhouse for the final time.

The last challenge is a tee shot that needs to avoid the water hazard to the right, separating the 9th and 18th fairways. Left is dangerous as a waste bunker is well placed to ensure a dramatic finish. Improved modern technology and altitude mean many will be able to have a dart at the green in two. Two bunkers sit at the bottom of the slope to the left and water again is in play short and right.

If you aren’t playing in a very competitive round, you would be encouraged to go for it and end the day in style.

Like anywhere else at Sun City, there’s more to life than protecting your score, with attractions around every corner. Sport and fitness. The Valley of the Waves. The Maze of the Lost City. Nightlife. Spa, health and beauty. Shopping. Family entertainment. SA Hall of Fame. Safari and wildlife. You name it, South Africa’s favourite playground has it all to offer. What are you waiting for? 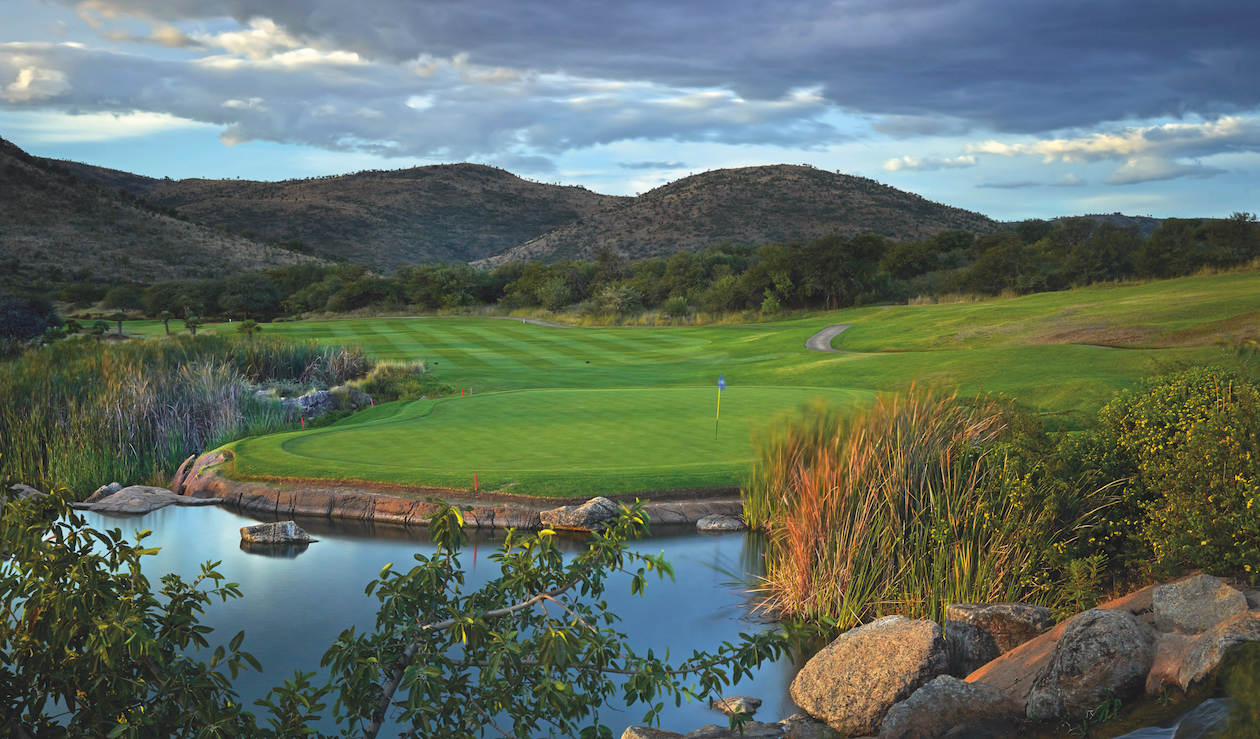 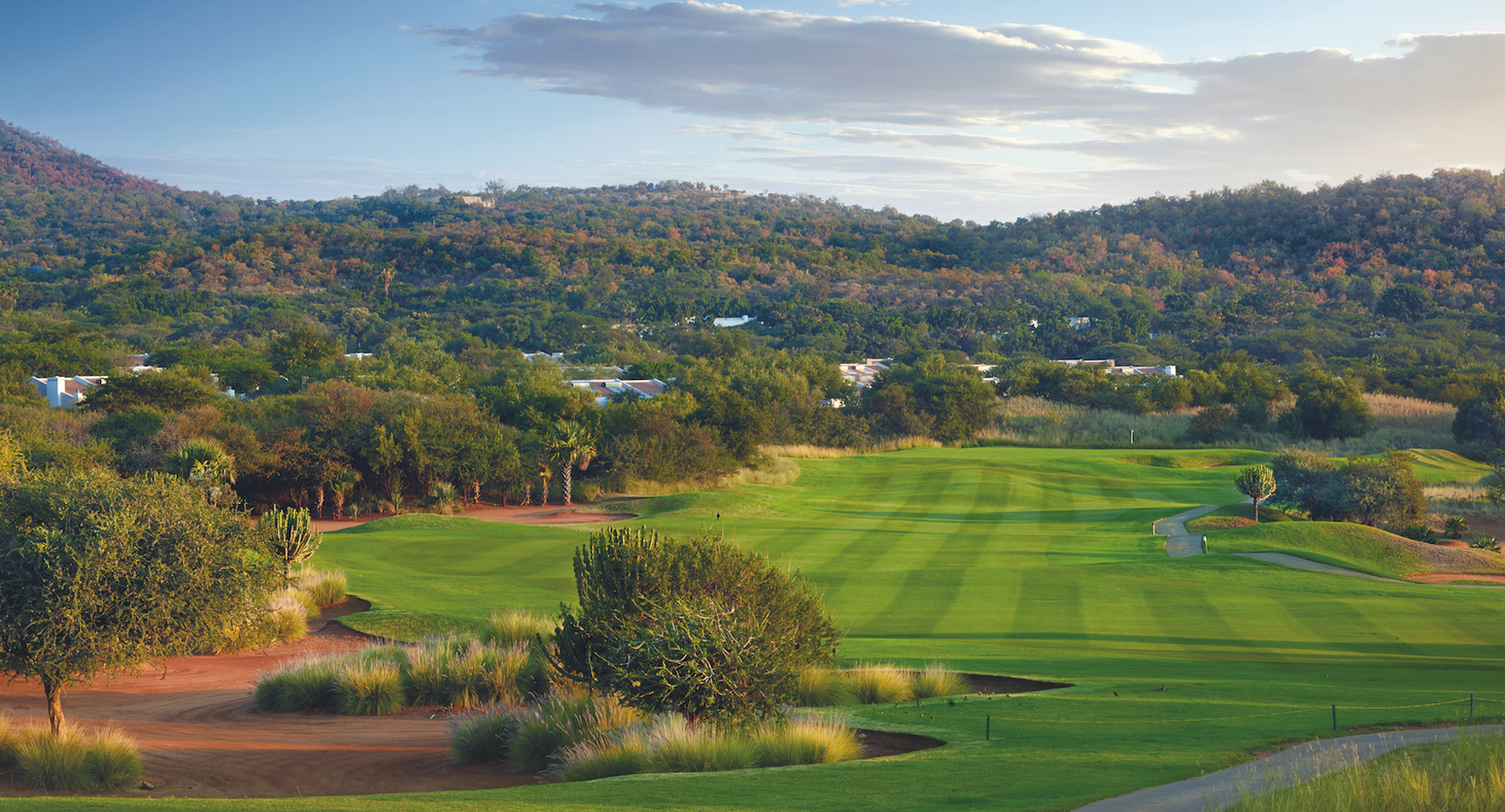