With the imposing Table Mountain looming above, Rondebosch GC is a bustling club offering members and visitors the chance to unwind, writes WADE PRETORIUS.

If you’ve played Rondebosch Golf Club a few times, you’ll probably be accustomed to enter from either side of the main entrance. From the bustling parking lot you’ll duck in left and make a beeline to sign in at the club’s pro shop, or if you’re parked further away, you’ll enter down the right past the 10th green; it’s a pleasant walk with the warm smiles of the club’s caddies to greet you and offer their services.

There is, of course, the intended walkway through the main entrance. It’s a celebration of the heritage of the club and a reminder of what Cape Town used to be like at the turn of the 1900s. The old, intertwined with the new, is a common theme that runs through this club.

The history of the club is woven into the roots of the game in the country from when it was introduced in 1885 and played at the Cape Golf Club in Wynberg. That club eventually split into the Rondebosch, Royal Cape and Mowbray clubs.

Rondebosch, which was originally on the Common and moved about before settling into its present position, suffered a setback in 1914 when the military took over the grounds as a camp during World War I. The course, as you may imagine, suffered severe damage, but it is written that the members took it in their stride and play was resumed within 12 months of ownership being restored.

The club was extended to an 18-hole facility after the acquisition of the land where the Red Cross Children’s Hospital stands today, but it wasn’t until 1935 that the club was given a permanent home when the city council acquired the rights to the old Fraserdale Farm. Two years later, a clubhouse was built, cementing its place as a landmark of the city.

The troubles for Rondebosch weren’t over yet, though, with the construction of Settlers Way and the Black River Parkway leading to a loss of land, forcing the club to find a way to accommodate several new tee boxes and greens.

Looking at the memorabilia adorning the clubhouse walls, you’ll notice how the spirit of the beginnings have been maintained.

One such piece, from November 1926, reads: ‘Up-country players who may be coming down to the Cape for the Christmas holidays are cordially invited to come and play on the Rondebosch Links. Special competitions are being arranged for visitors during December and January.’

Today, the club continues to treat visitors like members, with all but two days open for guests to enjoy a break from their daily grind.

The course was prone to its share of flooding – far more seldom in today’s climes – and the committee was notably upset by a picture of Table Mountain that happened to capture the 5th fairway completely submerged. Photographs show golfers attempting to play out of these unplanned water features. Today’s golfers share the same bravado, with the course remaining busy, even when the Cape winter is in full effect.

The trip down memory lane is well-advised and is a perfect appetiser as the game moves into the modern age.

It’s almost impossible to imagine the area devoid of the notorious Cape Town traffic hubbub, where instead the only noise would be the groan after a wayward shot or an excited shout for a rewarding stroke.

The modern way dictates that you either move with the times or get left behind, and that’s something the club has constantly been able to achieve, sometimes even being a step ahead.

The club offers everything of the new golf experience: a practice facility often resounding with the cheers and laughter of youngsters making their way into the game, the more hearty laughter of those on the deck enjoying their post-round rewards, and teenagers and university students aiming to squeeze in holes as the sun dips beneath the mountain.

The outstanding attraction is plain to see: Rondebosch is a playable and enjoyable test of golf on a course that is well-conditioned 12 months of the year. And at a reasonable price too.

What you don’t see from the roads alongside is a club that treats its visitors like gold. That’s not to say members are less of a priority, as the management team appreciates their loyalty and support.

It can be tough to get a booking on a Wednesday or a Saturday; almost a throwback to better economic times when clubs had queues just to book a time. Rondebosch has meandered through the harsher times with consummate ease; and standards have never dropped despite the picture some might have painted about the state of the game in South Africa. Instead, the prospective members’ board is full of new applications, and has been that way for some time.

Golf is far from in a recession, at least in the heart of the Mother City.

The number of rounds played last year proves that, with the club hosting as many as 54 000. It’s a staggering figure, but also testimony to the welcoming atmosphere that guests enjoy. Non-members played 56% of that impressive tally.

Many would be rightly confused to consider whether to call RGC a members’ club that welcomes visitors, or a visitors’ club playing host to its members. It’s part of the success of adding more men and women to the sport along the age spectrum. If being beneath the mountain is convenient, a golf course that is open to all can only be an asset to the city’s golf offering.

The course architect was Dr CM Murray, who was also responsible for Royal Cape, Clovelly Country Club and George Golf Club, and his work often put the local features to good use to amplify the layout. 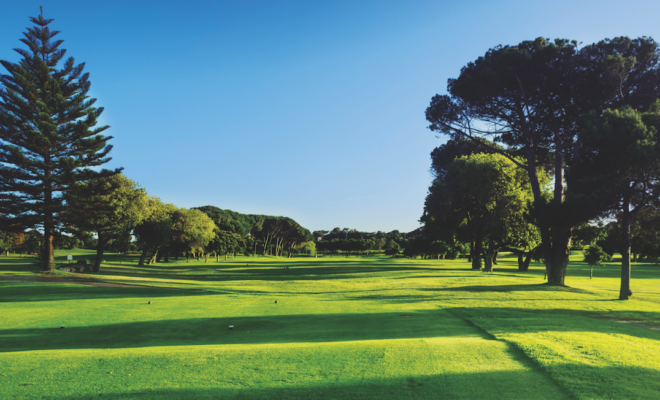 The remnants of his original design, adapted through the years to deal with the evolving game and climate changes, can still be seen in the tree-lined fairways, deep hollows, troughs and ridges that combine with the mountain range to great effect.

The latest design change came in 1994, due to a river-widening project which allowed the layout to be restored to its championship nature. On a number of occasions the course has welcomed the Sunshine Tour, the Ladies European Tour and top amateur events through the age groups. The upside for the members is the constant need to maintain and manicure the course, which provides a better golfing experience before and after the pros are put through their paces.

The canal, which winds through the course, provides challenges to the players and is home to a variety of bird life; from cormorants and kingfishers to wild ducks and flamingos.

For a few years the layout has been played ‘backwards’ with a 10-8 split from the usual front nine to back nine. The original 1st hole now plays as the 10th, which allows for a much more gentle introduction. Most would start their round with a long-iron off the tee and a wedge into a small, well-protected green. It may sound fairly innocuous, but watching groups ahead of you will show just how easy it is to leak your first strike out to the right for your first encounter with the trees. Golfers’ struggles are the same now as they were back then.

Off the yellow tees, the par-three 2nd may look gentle, but the large, undulating green is often difficult to find and just as difficult to make par once you miss it. The next few holes are key to your round, with a three-shot par-five being followed by the 4th, the new stroke three (it was stroke one before the new slope rating came into effect) which is usually back into the wind, and then a challenging par-four that plays tough at 357m.

A downhill par-three is next, but again, a green in regulation is not easy, as the prevailing wind now blows across from right to left to a slim green complex that has steep embankments left and long. The next three holes are arguably the best stretch on the course, with the 7th protected by bunkers guarding the green and the canal ready to swallow any tee shot leaked right with no bailout on the left. It’s another tee shot that demands accuracy if you are to escape with par. The 8th is driveable on some days, but the Black River protects the entire left flank. The par-five 9th offers all scoring variables, especially if the southeaster is blowing.

A small water hazard and bunker protect the hole from those trying to get as close to the canal crossing as possible, while many weekend golfers will find the small dam on the right in play with an exaggerated fade. The next shot is played either with a metal-wood for the green in two or to the lay-up area. The green is inviting and should either improve your score or help to limit the damage.

The back nine – or eight – is not without feature holes and picturesque views. The 10th is a very difficult par-four played over the slope and then up towards a tiered green. Many will get caught out thinking the par-four 14th – on the shorter side at 320m – is a giveaway birdie hole as it plays considerably downhill, while the next, an uphill par-four with a forgiving fairway is another hole not to be underestimated.

The closing stretch makes for great match play golf, with the 16th a gentle downhill par-three – that is if you have selected the right club, produced your best swing and safely found the dance floor. The 17th is a par-five that plays long into the wind, but is easily negotiated should you avoid the ‘magnetic’ trees down the right. A solid lay-up leaves a pitch to another long green that plays diagonally from the fairway and is one of the biggest on the course. Any match that goes down 18 is set for a thrilling finish; this long par-four demands an accurate tee shot and a mid-iron approach usually from a slanted lie in the fairway. 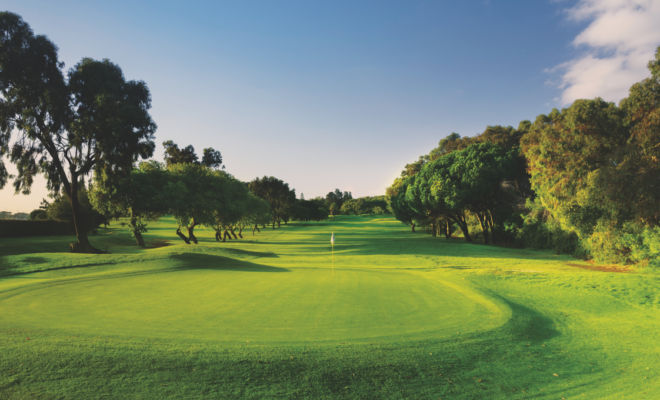 As the club’s website says, ‘Be confident, hit it long, and smile when you see the result!’ If that fails, simply book your next round and take your escape from the hustle and bustle of city life. The best part is that the weather is golf friendly year-round and you don’t have to travel far.

Rondebosch Golf Club is embracing the family and social aspects that the modern player seeks. The John Deere 9 Hole Par-3 Challenge (in association with CCJ) offers the prize of an all-expenses-paid trip to the John Deere Classic in the US in 2020. Plus R500 000 to any player making an ace in the grand final. The Rabbit Run – played at least once a month – is a par-three course that is stroked and handicapped. A great way to introduce beginners to the game, or help those with short-game issues to play their way into form.