The KwaZulu-Natal South Coast is a haven of must-play golf courses, with the perfect blend of playable layouts at the most reasonable of prices. Southbroom is certainly one of the best in both regards, writes MARK SAMPSON.

One might be inclined to regard the golf courses that dot the KZN South Coast as holiday courses that, on a windless day, are short and there for the taking. Yet this would be an injustice to the many fine layouts in this neck of the woods, particularly the likes of Wild Coast and San Lameer. Throw in Umdoni, Port Shepstone and Selborne, together with many others, and you are spoilt for choice in an area that is popular for golf tours.

The quaint village of Southbroom is situated in the middle of the South Coast and the golf course is a must-play gem when in the area.

Certainly, it can’t be overlooked that it is a short course. But what it lacks in length, it more than makes up for in so many other areas. Simply ask any golfer who has been to the South Coast and Southbroom will more often than not be at the top of their list. Whether it is due to the family at the core of the operation, a layout that seamlessly winds its way through the indigenous coastal terrain, or the fun factor the brings you back time and time again, it is a course one never gets tired of.

The term fun factor can be misleading, though, as this is by no means an easy layout. Yes, it is just 5,509m in length, but it is protected by the prevailing winds, smallish greens and water on many of the holes, meaning that while you may be tempted to overpower the course you’d be far better served playing for position. Your score will indicate how easy it is and if the obstacles are not safely navigated, lost balls and a higher score are quite often the result on this ‘fun’ course.

Like many courses in the area, Southbroom started as a simple nine-hole layout when golf was booming in the early- to mid-1900s. The history of the seaside town of Southbroom dates back to 1884, when an Englishman by the name of Alfred Eyles established a mission station in the area. Alfred’s youngest sons, Frank and Gilbert, subsequently became the founders of Southbroom. At the end of World War II, the two brothers formed the Southbroom Development Company, which was responsible for much of the development in the area.

Frank Eyles was responsible for the first nine holes of the course, built in 1939. With the help of local golf professional, J Navan, the course was routed through the indigenous bush, with much focus given to preserving the local flora. In 1948, the course was upgraded to the complete 18 holes you will find today – although much was changed during the expansion and only four of the original holes were incorporated into the new 18. The golf club’s formation was formalised in 1950, with the first president being none other than Gilbert Eyles.

Southbroom has several interesting factors which add to its memorability.

The starting holes pretty much sum it up. The 1st and 2nd holes, both par fours, are rather short, yet present danger in the form of water hazards.

The 3rd, another par four, is the stroke one. And at 365m into the prevailing wind, it is a genuine knee-knocker. From the tee box, thick bush left and out of bounds right are in play, and most players will require a longer club to reach the green in two. Leaving the ball on the right of the fairway is always advantageous to better access the green.

The short 111m 4th is the signature hole and one you will never forget. Golf director Derek James talks us through playing this iconic par three (see below this article).

Given its shorter length, Southbroom protects itself in a couple of ways. Firstly, the paspalum greens are a bit smaller than many courses, making accuracy on the approach shots important. Then, generally speaking, the cynodon fairways are not very wide. With thick, impenetrable coastal bush flanking them, a wild shot tends to result in a lost ball. One could argue that a golfer would be much better served taking a shorter club, such as a 3-wood, hybrid or long-iron, off the tee for accuracy.

Numerous water features meander through the course and add to the difficulty of shots on many of the holes, making accuracy off the tee boxes and for the approach shots non-negotiable.

The final line of defence, which can be expected at most coastal courses, is the wind. Even if it’s a slight breeze, it brings in just that bit of niggle during club selection. The final hole of the front nine illustrates this perfectly. As you stand on the tee box, at 410m, it is a diminutive par five, yet does not easily relinquish a birdie. Off the tee, water runs down the right-hand side of the fairway, which has a big landing area that narrows as bush encroaches on the left. It’s a risk-and-reward hole par excellence, with the green being one of the most unique in the country. Protected by a small bunker front centre, the green has two sides, pinched in the middle by a small palm. Going for, and finding, the correct side of the green, with a long-iron, is no easy feat.

As the course is in the centre of the Southbroom village, it is divided by a road that runs through it. The clubhouse, pro shop and holes 10 to 13 are on the one side, with the rest of the course on the other.

The back nine starts with a short par four of only 281m, which demands accuracy from tee to green. The main protection of this hole can be found greenside, with two bunkers on the right side and a steep slope on the left of the arrow-shaped green. The green itself has a number of tiers and extra effort should be made to try to leave your ball below the hole.

Turning back on yourself, the enjoyable par-three 11th awaits: a downhill 148m teaser with a tiny green. Water runs diagonally across the right flank of the hole and five pot bunkers protect the left. When the wind is up, its stroke-10 rating can be a bit misleading.

Holes 12 and 13 are both short par fours of 290m and 308m respectively and each offers a birdie opportunity for the player who safely finds the short grass off the tee.

As you cross back over the road, the longest par three on the course is next. From the elevated tee, the 183m 14th can be quite the challenge, especially when the prevailing right-to-left crosswind is blowing. The green is not an easy target, with its two bunkers front left and right, and a slightly longer shot is the better option on this hole.

Rather unusually, Southbroom closes with two consecutive par fives. At 449m and 422m in length, they may present a final opportunity to grab a birdie, but again accuracy is demanded to achieve this.

The 17th is played directly into the prevailing wind, with thick bush down the left side and two bunkers on the right of the narrow landing area. The green itself is large and presents no major challenge.

The closing hole winds its way up to the green and has one of the more challenging approach shots, due to the small, elevated green. Off the tee the fairway is rather flat and generous. It then narrows dramatically and the diminutive green is surrounded by five bunkers. Sloping steeply from back to front, it is a challenging two-putt.

In an interview with Dale Hayes, highly respected golf instructor Butch Harmon lamented the fact that modern technology seems to be taking away the fun of golf. As clubs hit the ball further, courses are being stretched to play longer, with narrower fairways and more bunkers. Ultimately, they are becoming far too difficult for the average golfer. What’s more, longer courses take more time to play and have higher maintenance costs.

Length, and difficulty, were hardly pressing factors when Southbroom was designed and its ease of play makes for a much more enjoyable round of golf, with more than enough exercise to qualify for a cold one at the 19th.

A huge part of Southbroom Golf Club’s charm is the couple who will be celebrating 25 years of service in February 2022. Derek and Sheena James, who run the pro shop, are stalwarts and the greatest ambassadors for the club. They are in fact very much the face of the club. You will struggle to meet a more friendly, enthusiastic and genuine couple.

Derek, who still holds the joint course record of 62 (with Gavin Sole), is renowned as one of SA’s short-game specialists. He has won five PGA awards, including Club Pro of the Year and Teacher of the Year. The essence of Southbroom is entwined with their unfailing enthusiasm and charisma.

It is very much the reason Southbroom is always a crowd-pleaser. It will never be chosen as SA’s No 1 course, but if there was category for the friendliest or most popular course, it would no doubt make the podium every year.

So next time the discussion of where to go on your next golf tour comes up, I’d suggest you look no further than KZN’s South Coast. With its numerous golfing options, as well as an abundance of budget-friendly accommodation and restaurants, you can’t go wrong. No doubt the entire region needs some assistance from South Africa’s golfing family. 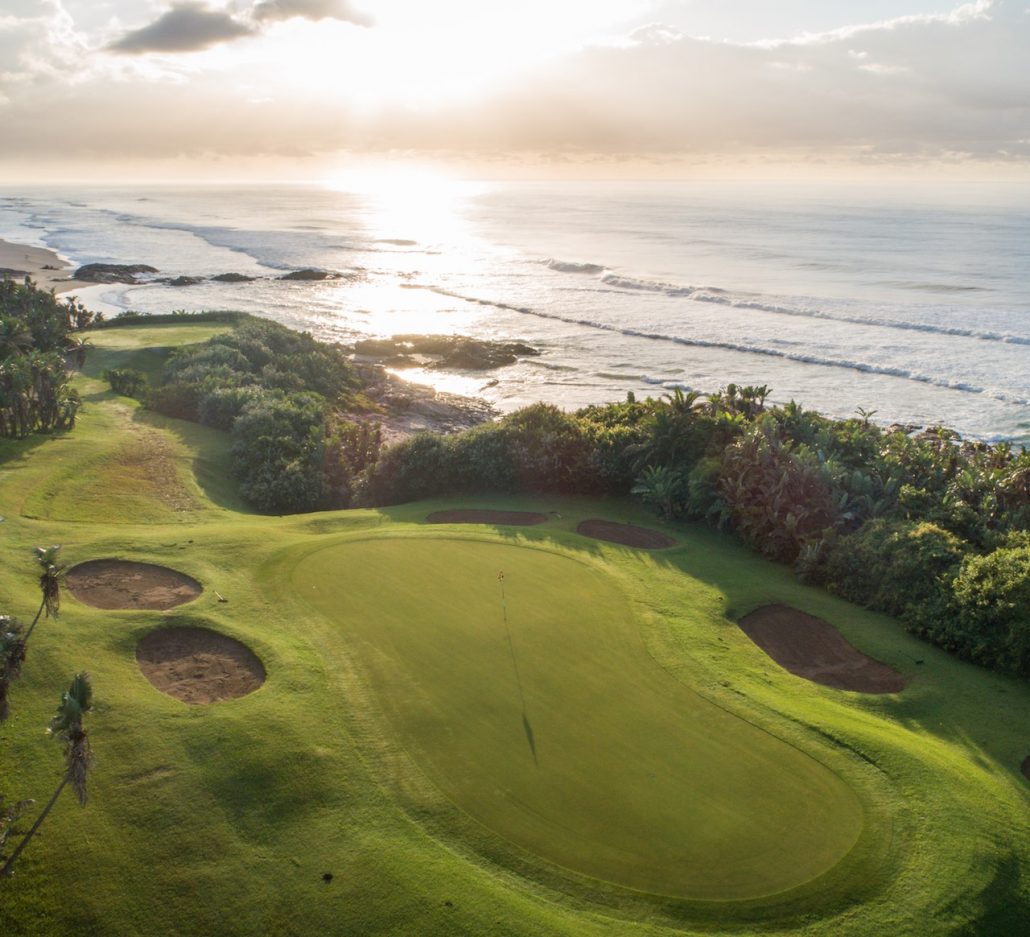 The par-three 4th is as pretty a hole as you will find anywhere in South Africa. Big statement, but also completely true, which you will understand as you step on to the tee box. You feel like you are standing on the beach as the sound of the waves envelops you.

Snapping back to reality, you will note the small green peeking out beyond the coastal bush, which encroaches up off the beach between the tee and green. Suddenly the 111 metres is not so simple.

According to local PGA professional Derek James, the main difficulties of the hole are the length and narrowness of the green. At just over 25m in length, hitting the green does not guarantee a par as it can still be quite a distance to the hole. It is a very narrow target that if missed will most likely end in a sandy lie in one of the six bunkers. The prevailing wind coming in off the sea is the trifecta in making this a short, but challenging hole.

According to James, if the wind is up it is best to take an extra club, put the ball back in your stance and swing easy. This will make for better contact with less spin, sending the ball off on a slightly lower trajectory to stay out of the wind. With varying conditions, anything from a gap-wedge to 5-iron may be needed to reach the surface. Derek’s final bit of advice before walking off the green is to turn around and look back to the tee and sea beyond.

Undoubtedly a hole you won’t forget in a hurry. 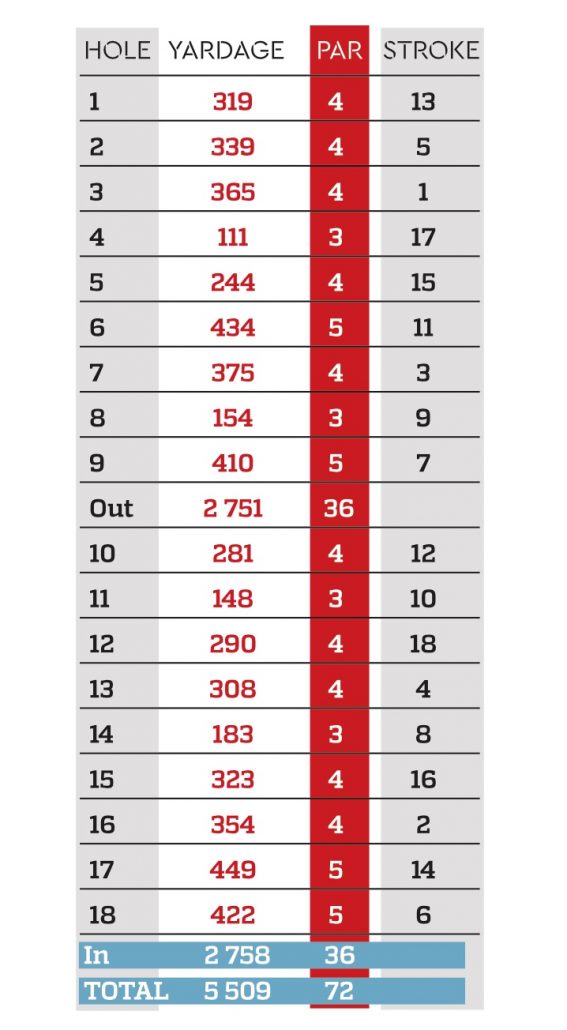 From Durban drive south for about an hour along the N2, which later becomes the R61. Southbroom is at the end of the toll road, 7km after the Margate/Ramsgate offramp, and is served by two entrances, north and south. At the Southbroom north entrance traffic lights, turn left into Southbroom Ave and follow the signs to the clubhouse.