From humble beginnings a century ago Clovelly has stood the test of time and is an excellent proposition all year round, writes BRENDAN BARRATT.

Visitors to Clovelly Country Club today will happen upon a verdant, busy golf course that forms part of a lively, welcoming club. Tucked within the sand dunes that frame the small community of Fish Hoek, south of Cape Town, the clubhouse offers stunning views down the valley to the sea below.

First impressions may be that this is an idyllic position for a golf course, yet the history of the club, dating back to the 1920s, tells a different story.

The land on which the club sits was originally part of the Klein Tuin farm, which, due to a somewhat irregular supply of water, comprised not much more than barren sand dunes adorned with the odd tuft of grass.

In 1920, the farm was sold to Cape Estates Ltd and the new owners were keen to develop houses on this ruggedly beautiful piece of property. However, potential homeowners were deterred by its remoteness, so plans to build housing were shelved. Instead, the land was offered up for lease to a group of naval men from Simonstown, for the purpose of building a golf course. This, it turns out, led to the birth of Clovelly Golf Club – as it was then known – a rough and ready nine-hole track set amid the sand dunes.

With fewer than 100 members and a modest cottage serving as the clubhouse, golf at Clovelly was tough going. With very little grass, golfers took to using red balls, since they were easier to spot in the sand, and after their rounds it was common practice for members to head back out to plant grass on the barren sections of the course.

A critical juncture in the history of the club came in the early 1930s. Needing to come up with the heady sum of £1,000 to purchase the land or face losing it, in stepped two men who rescued Clovelly from closure.

Michael Pevsner was a Russia-born tobacco tycoon who had made his fortune in Zimbabwe, while Gus Ackerman had started the country’s first chain of soft goods stores.

The pair purchased the club, renamed it Clovelly Country Club, and set about imposing their vision.

At the same time, there was a split within the club, with some members splintering off to form a new club not far from Clovelly – Westlake Golf Club.

According to Pat Dickson’s wonderfully written Short History of the Clovelly Country Club, while Pevsner enjoyed the social aspects of the club – and served as club president from its inception until his death in 1941 – it was Ackerman who was largely responsible for making things happen behind the scenes.

‘Gus Ackerman was, from the start, the moving spirit behind the new enterprise. Energetic and determined, he set about organising the new club on an ambitious scale, which reflects his dictum that, “If something was worth doing, it was worth doing well – and if it wasn’t worth doing well, there was no sense in beginning in the first place.” Committee members found him a demanding leader but a fair man to work with, a man who never spared himself when there was any obstacle to overcome.’

Beyond the running of the club, the pair regularly dipped into their own pockets to finance any shortage in the club’s funds. Given that membership fees were the main source of income for the club, Pevsner and Ackerman set about recruiting golfers from other clubs while, in keeping with tradition, naval officers stationed in Simonstown were warmly welcomed.

By the end of 1932, Clovelly had been upgraded into an 18-hole golf course – designed by Dr CM Murray – but with vegetable farmers further up the Silvermine River using up much of the water supply for their crops, the club struggled to keep the grass growing, particularly in summer.

The solution was found in boreholes drilled through the Table Mountain sandstone – and the club still makes use of boreholes today.

Bobby Locke was one of the most famous members of Clovelly and, in 1947, he paired with Maurice Bodner to take on Sam Snead and Aussie Norman Von Nida in an exhibition match at the club. Locke and Bodner ultimately emerged victorious against their highly rated opponents.

Gus Ackerman remained chairman of Clovelly for 21 years before he felt it was time to step aside. He moved into the position of club president, never missing a meeting even though he no longer had a vote, and remained there until his death in 1966.

Another significant moment in Clovelly’s history came in 1955, when the clubhouse burned down. The ‘Great Fire’ started with an electrical fault and although most club records and trophies were hastily carried out, by the time the fire engines reached the building, it was too late to save it.

Rebuilding was slow and it was only in 1969 that the restoration was completed.

In 1974, Gus Ackerman’s son Raymond became club president and, within two years, he managed to convince the prime minister of the time, BJ Vorster, to allow the club to open its doors to golfers of all races – becoming the first sports club in the country to do so.

Following in Gus’ footsteps, Raymond took on a role of the club’s father figure, even contributing his own funds when the club fell on difficult times.

It was Ackerman who oversaw, and funded, the automated irrigation system that was installed in the late 1980s, and this proved to be a huge turning point for Clovelly. The improved conditioning of the course meant Clovelly could compete with the best courses in the region.

‘Mr Ackerman is all about people in general and he is passionate about the staff and members of Clovelly,’ says Clovelly’s general manager Paul Stoner.

‘With his remarkable business acumen and sharing his father’s deep connection with the club, his contribution to Clovelly has been immeasurable and it is no exaggeration to say that the only reason the club is able to be what it is today is through the passion and generosity of the Ackerman family.’

By the early 2000s, golf tourism in South Africa was booming and the scenic Clovelly layout became a huge attraction for foreign golf tourists. Rather than disadvantage the club, the relative shortness of the course has proved to be an attraction for players seeking a less stressful round of golf.

‘While we don’t have the space to lengthen the course, that’s not really what we are about anyway,’ says Stoner. ‘We don’t want golfers to feel like they have been beaten up by a long course with nasty rough. We want the average golfer to enjoy their round and have chances to make birdies and pars. Any tweaks we make to the layout, such as reshaping bunkers, are done with high-handicappers in mind.’

The result is that Clovelly has remained one of the most popular courses in the country, recording well over 50 000 rounds per year.

With Raymond Ackerman having recently stepped aside from his role as club president – he will become honorary life president – his son Jonathan is set to continue the family legacy in this position, having successfully steered the club through the challenges of Covid-19 in his previous role as club chairman.

Another part of the Ackerman family legacy is the Raymond Ackerman Golf Academy, which was opened in the early 2000s, and offers life skills training – as well as golf training – to boys and girls from the nearby areas.

Today, Clovelly is considered to be one of the finest courses in the Cape and can claim to be one of the most scenic. Although it is short by modern standards, the course condition tends to be excellent all year round and, with very few changes having been made to Dr Murray’s original layout, there are numerous risk-and-reward holes to tempt the bigger hitters to attempt to drive the greens.

The par fives at Clovelly are no pushover, particularly when the wind gets up, as it often does in that part of the world. The 9th hole, in particular is a challenging three-shotter. Played into the prevailing wind, with out of bounds hugging either side of a generous fairway, it takes three good shots to reach a long, narrow green that has more than enough slopes to trick you up.

Narrow, tree-lined fairways and smallish greens offer further protection to the course, and while it is unlikely that the golfer will overpower the course, most amateurs will enjoy the opportunities to make birdies and pars.

Perhaps the only downside to the course is that it is a 40-minute drive from Cape Town. The drive, however, along the Cape Peninsula, is one of the province’s most scenic and, provided you’re not in a hurry to make your tee time, is most enjoyable.

Once there, you can relax and enjoy your round, for on a calm, sunny day there are few better golfing experiences than 18 holes at Clovelly, followed by a cold beverage on the club balcony.

The par-four 4th may read only 338m on the scorecard (from the tips), but it remains one of the most challenging holes on the course and it fully merits its stroke rating of seven.

There are two main reasons for this, explains general manager Paul Stoner. ‘Firstly, there is out of bounds running all the way up the left side of the hole, so anything tugged to the left is asking for trouble,’ he says. ‘Accordingly, most players favour the right side of the narrow fairway and even the right rough, which can result in tree trouble and a blocked line to the green. There’s also a pesky bunker on the right side that catches many tee shots.

‘On a calm day, the tee shot is nothing more than a fairway wood or long-iron. You need to play for position and not leave yourself too far out. This should leave you with a mid- to short-iron into a reasonably big green that slopes from left to right. Getting your club selection right is a must and anything longer than a mid-iron into this green makes the approach shot very difficult.

‘I wouldn’t suggest attacking the flag too much – just make sure you get your distance right and trust yourself to two-putt on the green. Then take your par and run to the next tee.’ 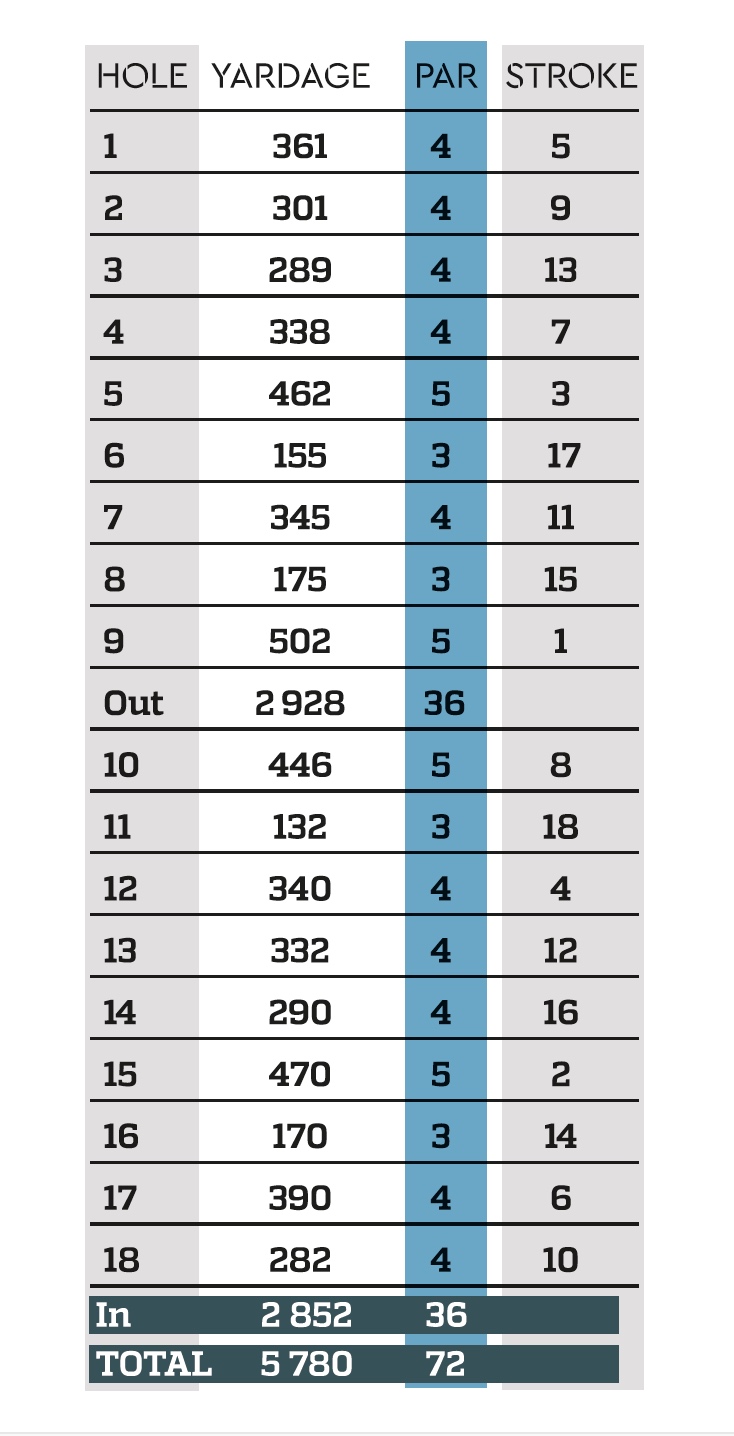