Known for its spectacular views and year-round conditioning, Arabella never gives up the quest for perfection, writes BRENDAN BARRATT.

It has been over 20 years since Arabella, the delightful Peter Matkovich layout on the banks of the Bot River Lagoon, was introduced to the South African golfing public. While the estate’s five-star Tsogo Sun Hotel, Arabella Hotel Golf & Spa has been through numerous owners over the past two decades, the golf course has steadfastly remained one SA’s most coveted and prestigious layouts, consistently ranked as one of the country’s top 10.

The course was officially opened in December 1999 and Matkovich’s immediate challenge was to transform a stretch of idle farmland into one of South Africa’s finest golfing layouts.

‘The land was an old, run-down farm and it was overrun with alien vegetation, particularly down by the lagoon,’ recalls Matkovich. ‘It took us three full months to clear the Port Jacksons and gum trees before we could even start to work on the course.’

To complicate matters, ‘Matko’ had to follow very strict environmental guidelines, with his team’s every move monitored to ensure that all workers remained well clear of the environmentally sensitive lagoon area that borders four holes of the golf course.

Matkovich had recently completed the Steenberg and De Zalze courses in the Western Cape and had built up a strong reputation for sustainable golf course creation while enhancing the layout’s natural surroundings, so there was little risk of the lagoon being compromised during construction. Even today, the lagoon wetlands remain a no-go area for golfers.

The late 1990s and early 2000s were peak times for golf estate development in South Africa.

‘Everyone who had a piece of land seemed to be building a golf estate,’ Matkovich recalls. ‘There were so many that were popping up at the time, but there were also a few that unfortunately never made it.

‘If you look at the most successful estates from that time – the likes of Leopard Creek, Fancourt and I’ll include Arabella in that list – they all have one thing in common. They had developers or owners who understand and love golf. This means they placed the golf course as the centrepiece of the development, rather than the housing.

‘Yes, it can be difficult to find a balance between the housing around the course and the golf course itself, but the best estate layouts don’t have houses intruding on the playing experience.’

In Arabella’s case, developer Alex Simpson presented a clear vision of what he wanted – and that was first and foremost a top-quality golf course.

‘Alex supported us all the way,’ Matkovich says, ‘and when you get a developer who gets into bed with the course designer, rather than push for profits in housing sales, it is a huge help.’

From the beginning it was clear that Matkovich had created something special, with the course winding its way around the 145-room Tsogo Sun Hotel, which sits near the top of the hill and offers sweeping vistas of the course and the lagoon.

The finishing stretches of both nine-hole loops bring the lagoon into play as a stunning backdrop, and each loop includes a short par four, tricky par three and a par five – in order to encourage a greater spread of scores.

The signature par-five 8th hole plays down a steep hill to a well-protected green that juts out on a mini peninsula into the lagoon. With great views from the tee box down to the green, this must rank as one of the most photographed holes in the country.

In 22 years the course has consistently delivered when it comes to conditioning and it is rare to hear of any complaints by visitors.

‘The key is to keep on improving the course and investing in it,’ explains Matkovich. ‘Fortunately that’s what they have done at Arabella. They also have a fine superintendent in Derek Bolton, who has been there since the beginning and is brilliant at what he does.’

Director of golf Mike Munro reiterates that Arabella is not a course that is comfortable sitting back on its laurels.

‘We have such a great layout that we feel that any improvements we make should not require us to change any holes,’ he said. ‘Instead we look at our weak points and get to work on those.

‘We completed a big rejuvenation project this past winter where we improved all our bunkers,’ he said. ‘They were already rated as some of the best in the country, but we felt we could make them even better, so we have reshaped all 73 of them and brought in new white sand – 2 900 trailer loads of it!

‘The one part of the course we felt needed a change was the 11th, which is a great hole but it felt a bit weak from the tee because you had a large fairway bunker on the right that you couldn’t see. So if you were a first-timer here, you might have hit a good drive up the right, only to find your ball in the bunker.

‘We adjusted the levels of the fairway and converted the big bunker into two smaller, raised bunkers that are now visible from the tee. We are very happy with the results.’

Given its historic reliance on overseas visitors, the lockdowns and travel restrictions brought about by Covid-19 have had a major impact on the Arabella estate, particularly the hotel component.

‘It’s been tough,’ says Munro. ‘To have the hotel closed for so long, with staff still needing to be paid, put us into survival mode. In some ways it still feels like we are recovering from that period, despite being open for business for a while.’

Fortunately for Arabella and Tsogo Sun, a lifeline came along in July 2021 in the form of the British & Irish Lions tour to South Africa. When Covid resulted in all remaining fixtures being moved to the Cape, the entire touring party took up exclusive residence in the hotel. There were few complaints from the rugby players, who enjoyed the five-star luxury accommodation, the gym facilities and, of course, the golf course.

‘The Lions tour really saved us,’ says Munro. ‘It was great business for the hotel over what was a very difficult period.

‘We had very strict Covid protocols in place but they were still able to play golf just about every day. Most afternoons, after they had finished their training, there would be about 40 guys going out and playing nine holes.’

Over the years, Arabella has been a regular host for professional Sunshine Tour events, including the Vodacom Origins of Golf and the popular Nelson Mandela Invitational. The last time the pros put Arabella to the test was in 2018, when Neil Schietekat shot three rounds in the 60s to claim a narrow win over Louis de Jager in breezy conditions at the Origins series. While the course is not particularly long by modern standards, there was enough to test the country’s best, with the cut coming at three over par.

Yet the course remains decidedly playable for amateurs. The fairways are reasonably generous and blend in with the surrounding fynbos, which ensures it is not intimidating from the tee box.

‘Any time you get the golfer to start seeing the course and not the hazards around it, like bunkers, water or out of bounds, you’ve done well,’ said Matkovich.

There are also four sets of tees, giving players plenty of options to play the course according to their ability.

‘I think the biggest issue these days – and I’m old enough to be at that level now – is that many of us play off the wrong tees,’ says Matkovich.

‘They have done a wonderful job of rating all the tees so you can play off any of them and not have to worry about things like not being able to reach a par four in two.

‘We have the red tees, which used to be called the ladies tees, and people like me who don’t hit the ball far any more should be playing off the red tees – it is so much more enjoyable.’

As with all fine layouts, Arabella has an excellent balance of holes, and its strong mix of long and short holes ensures players walk away from the round having used most of the clubs in their bag. The course holds no hidden traps and seems to reward good play without overly punishing any minor mistakes.

With the Arabella Hotel Golf & Spa towering above the clubhouse, Arabella must rate as one of SA’s finest stay-and-play courses. Golfers can roll out of their bed, catch an elevator to the ground floor and step on to the practice green in minutes.

For out-of-town visitors, this area is also within driving distance of the southernmost tip of Africa and is a prime spot for day-tripping, with numerous wine farms and interesting villages nearby. The busy holiday town of Hermanus, famous for whale watching, is a few kilometres down the road, and its 27-hole course, together with the nearby Kleinmond Golf Club, make this a very popular destination for golf tours.

‘The holes on the closing stretches of both nines could all be considered the course’s signature hole. The 8th and 9th
on the front nine and the 17th and 18th on the back nine are spectacular, and all have amazing views of the lagoon,” says Mike Munro, Arabella’s director of golf.

‘The par-three 17th is a great hole and I would argue that it doesn’t quite get the credit it deserves. Coming near the end of your round, it’s a tricky hole that can catch you out.

‘When you stand on the tee box for the first time, you might not realise how good it is. But once you get to the green, you begin to realise just how clever the design is. And the views from the 17th green are superb – in fact, the cart path just above the green is one of my favourite spots on the whole golf course, because it has the best views over the lagoon.

‘Being next to the lagoon, and exposed to the elements, the type of shot you hit is very much dependent on the weather. On one day you might be nudging a 9-iron into the green, while on others it might be a full 3-wood.

‘From the club tees, the hole plays anywhere between 145m and 160m. Up the left side, between the two bunkers, is a good line into this green because if you pull it slightly you could get a kind bounce off the bank.

‘Also, missing the green to the right brings a large greenside bunker into play. We have recently reshaped the bunker to be more bold and hold more sand, but it is still a difficult shot from there. If you go right of the bunker your ball is in the lagoon!

‘What makes this hole deceptive is the slope of the green. It doesn’t look like it has a lot of break, but it is positioned on the slope of the mountain, so any putts down or across the green have enormous breaks. My advice to golfers is to try to leave their ball below the hole, resulting in a slower putt with less break.

‘Of course, that is easier said than done, because most golfers will hit between a 5- and 7-iron to what is quite a small target.

‘Remember, even if the 17th at Arabella gets the better of you, be sure to take a moment at the top of the green to take in the views.’ 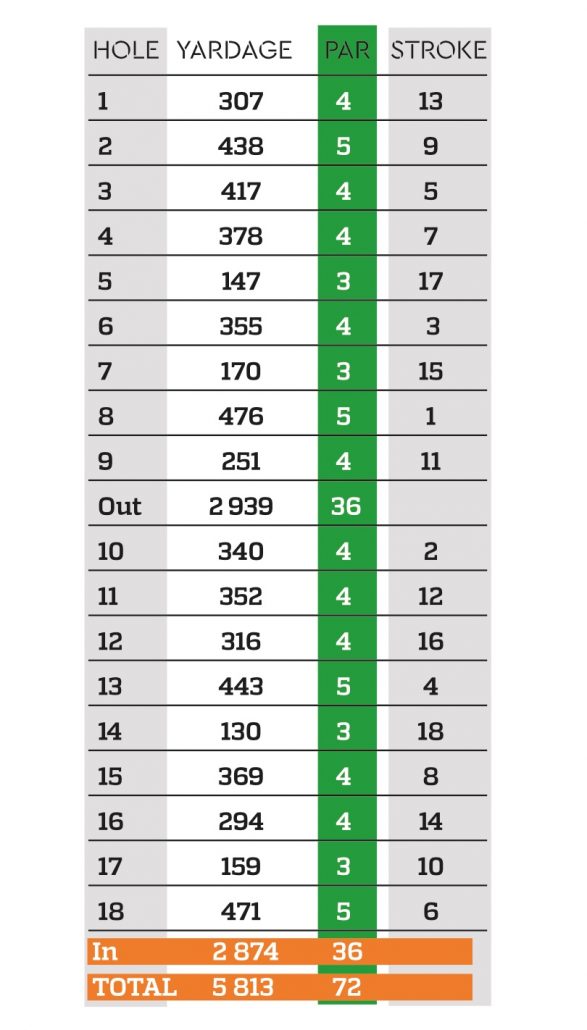 BY ROAD (FROM KLEINMOND)

Take 11th Ave and Ninth St to Main Rd/R44. Turn left on to Main Rd/R44. Continue to follow R44 for 10.7km. Drive to Arabella Country Estate. Turn right. At the roundabout, take the first exit. Turn right, destination will be on the right. 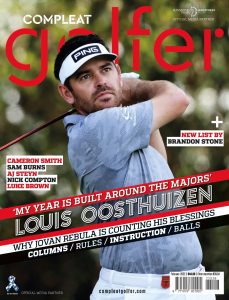