Something for everyone is almost always the goal but often the hardest to achieve. Young, old and all those in between have different needs, tastes and expectations.

Increasingly, consumers are becoming more selective where to spend their hard-earned rands. Customers are demanding an all-round package with endless options. It’s a tough bouquet of demands to meet  but one San Lameer and the estate on which it is built can confidently say it is well placed to satisfy.

The course has its place in history as the first golf estate developed in South Africa on a nature reserve which was
granted to one Colonel GH Langeler, an influential businessman and keen naturalist, in 1938. He introduced exotic
and indigenous flora that created a haven of considerable beauty. His trust stipulated that any new owner should continue with his nature conservation drive and that devolved on to Sanlam, who bought the property in 1975.

The area was declared a private township and additional land was acquired, including two banana farms, to accommodate an 18-hole championship golf course and clubhouse. Legendary designer Peter Matkovich, who played at two Open Championships, and former European Tour star Dale Hayes were commissioned to build it. The course was a labour of love as it was sculptured around one of the last remaining wetland forests on the South Coast. It was designed to preserve areas of sensitive vegetation and uses the indigenous plants and shrubs among the natural features.

Matkovich’s work can be seen throughout the continent, with a number of projects in South Africa complemented by courses in Zimbabwe, Zambia, Malawi, Namibia, Mauritius, Nigeria and Tanzania. This particular layout is a testimony to his design philosophy of testing golfers physically and mentally. Another principle is the finished product must aesthetically enhance the environment; this is, after all, what makes every course unique.

The dream became reality on 7 November 1992, when the course was opened, and the estate has flourished
ever since. Against the need to modernise the course (read, make it more player friendly with more forgiving areas and closing up some of the notorious water hazards) the ambience has remained the same. And that is even with 620 private villas sprinkled around the property, and a world-class hotel.

Who wouldn’t want to visit to enjoy the subtropical conditions and cool breeze off the Indian Ocean? The sea plays a role, not only for its picturesque contribution, but also for providing two magnificent Blue
Flag beaches less than a gap-wedge away from the estate. Whale sightings from the 8th green are not uncommon but should you be there out of season, you will have to settle for some of the 195 bird species that make their home here. For the birders among us, look out for the crowned eagle that is often ‘in play’ as you navigate the treacherous par-five 13th hole. Other regular spectators include impala and duiker – red, grey and blue – as well as bushbuck.

One way of getting a closer look at the estate is via the new mountain-bike trail, which is suitable for the whole family and riders of all abilities. The main route is made up of seven trails with a total distance of 9.3km. Other activities include tennis, squash, fishing, bird-watching at the dam, climbing walls for children and a bowling green. That’s all on top of the floodlit nine-hole pitch-and-putt course.

While many South Africans naturally gravitate towards the braai, the clubhouse offers wood-fired pizzas and a sushi bar in season. The options are almost endless and perfectly complement its superb golf offering.

Guests who arrive to check in for a round will no doubt be greeted with a warm smile by the team at San Lameer Country Club as holiday mode is instantly engaged. It’s a hallmark of the director of golf, Meyer du Toit, who has made his home here for the past seven years.

It’s a team effort; from the barista who writes guests’ names into the foam of their cappuccino, to the bar staff who are on hand to help quench thirsts or lend an ear to a post-round sob story.

The pursuit of excellence can also be seen when the estate experiences tough times. A freak flood in 2019 left the course unplayable but the greenkeeper and his staff worked around the clock to have it reopened just 48 hours later. Another particularly scary moment was when a fire broke out and moved swiftly along the southern perimeter fence adjacent to the sea and the lagoon. The team worked heroically to ensure no properties were seriously damaged.

The championship course, which has played host to men’s and ladies’ Sunshine Tour events, as well as numerous junior tournaments, seemingly offers a gentle start. By avoiding trouble for the first three holes, you arrive in a positive state of mind for the short par-three 4th. It plays downhill, with water protecting the wide green. Club selection is key as bunkers lie in the slope behind the putting surface. 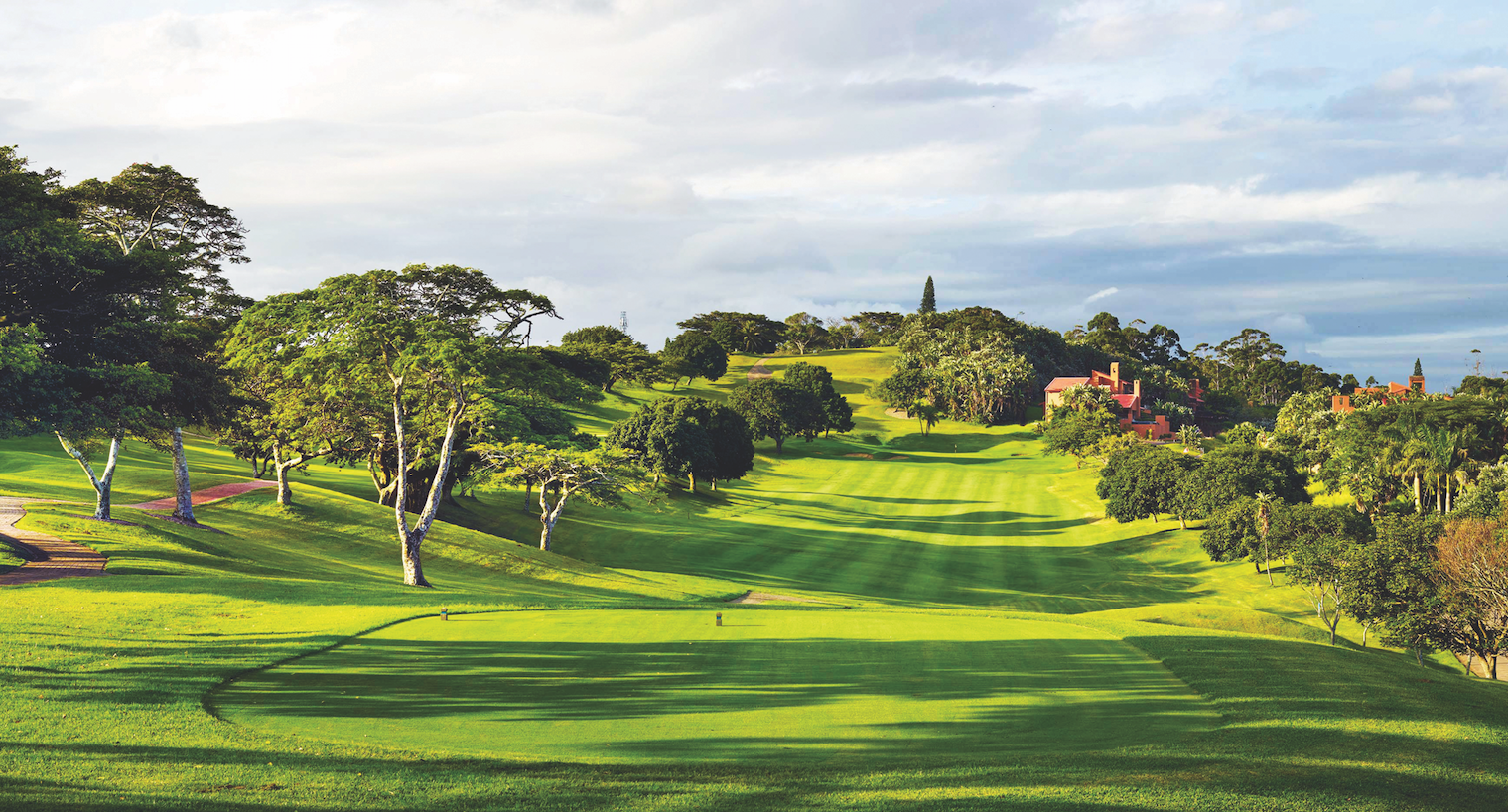 The 6th requires a tee shot towards the palm tree on the left and then an accurate approach to the green that sits well below the fairway, with water short and left. Water plays a significant role in the course’s defence, against which accuracy is far more important than length off most of the tees. However, a big drive is a must off the 7th tee, which is the course’s stroke one for a reason. From the club tee the hole measures 400m, which means most mid-level golfers are hitting driver and a long-iron into the green. 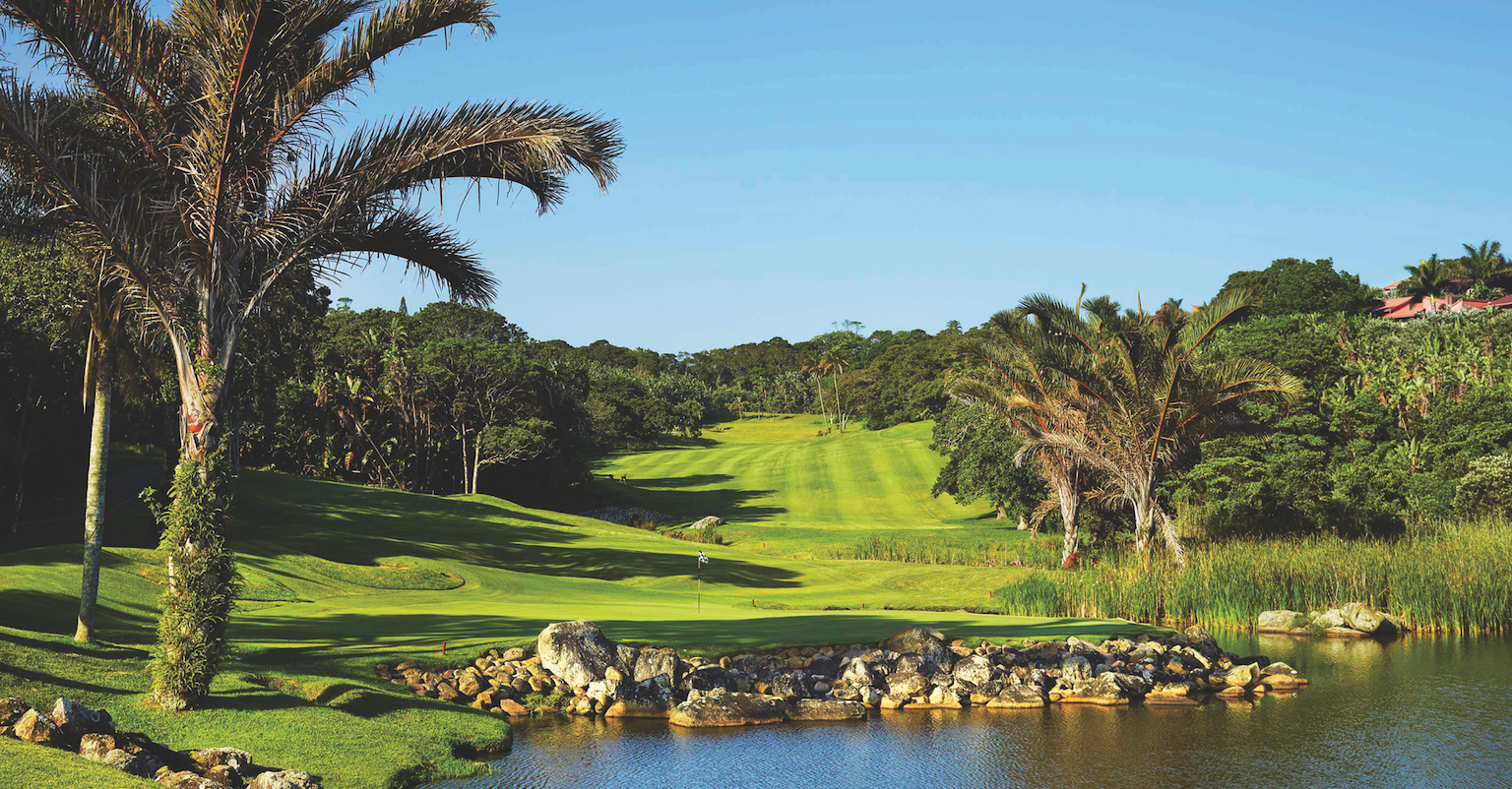 The 8th provides a good chance to improve your round but, again, a miss off the tee to the right will leave you scrambling. The 9th is a splendid short hole which Du Toit describes in detail on page 67.

The outward nine starts with three holes that require some course knowledge. Keep your driver in the bag and play for position until you get to the 12th, where laying up is not an option as you take aim at the green, uphill from the tee. Missing right must be avoided and a birdie is in play even if you find yourself in the greenside bunker off the tee.

If you are superstitious, the 13th will feed into your anxiety as water plays a part from tee to green. It guards the right off the tee, it cuts off the fairway and runs along the left of the ‘second fairway’ and protects the perched green. It’s a hole that has wrecked many scorecards but is playable if you concentrate on your yardages and avoid the left in your approach. 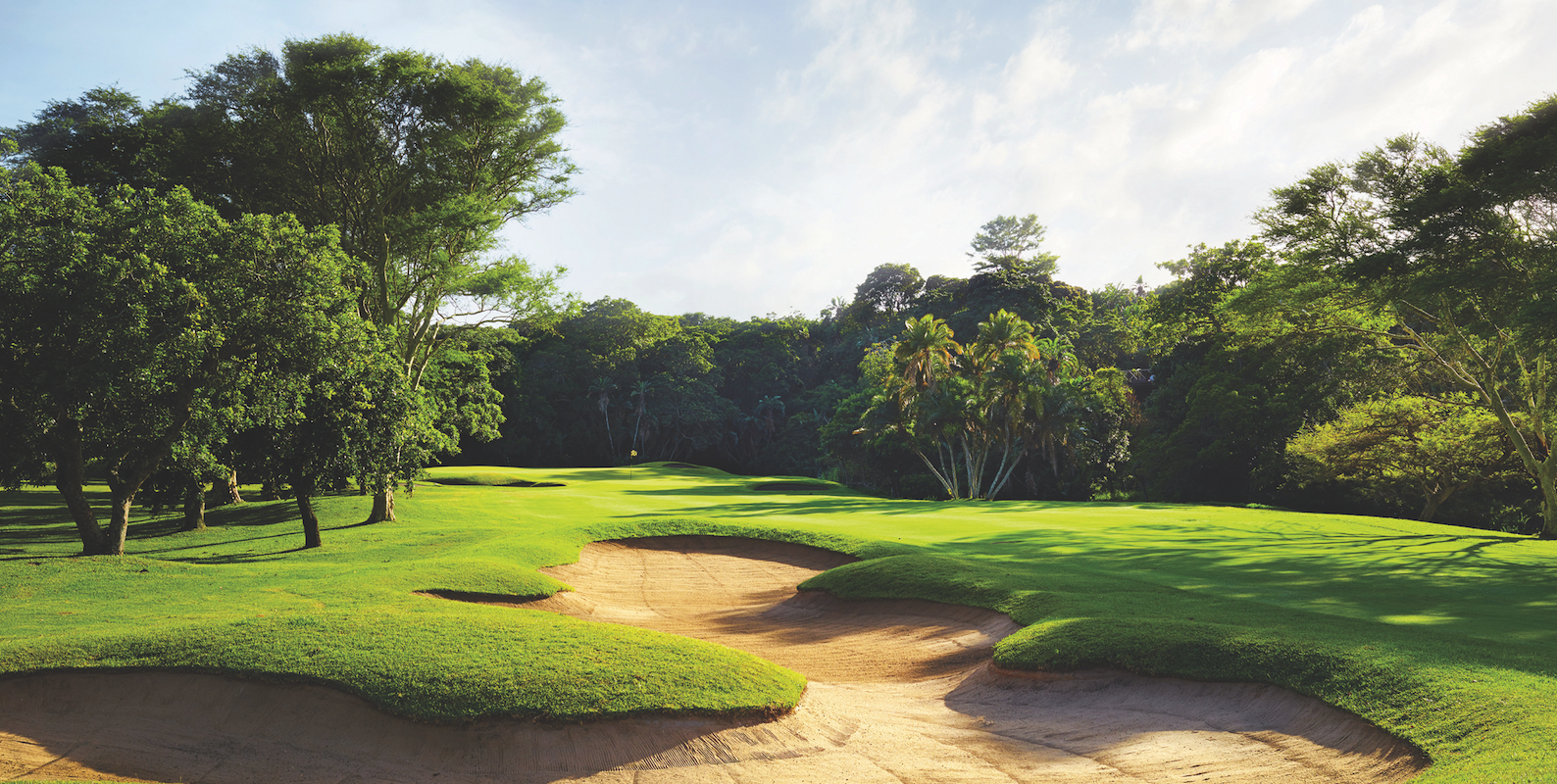 The inward run includes two par threes – at 14 and 16 – which have elevation changes and undulating greens as their main defences. They bracket the par-four 15th which plays as the stroke 12.

Well-placed bunkers and some of the hardest greens to read are the foundations of this stretch which leads you to the closing holes. The 17th has one of the biggest greens on the course but there’s plenty to do to get there in one piece. The tee box overlooks a fairway that slopes from left to right but does not reveal the stream that cuts off the landing area. A long-iron and a three-shot strategy should be considered. The second shot offers little danger as you prepare for a wedge into a green with water short right. 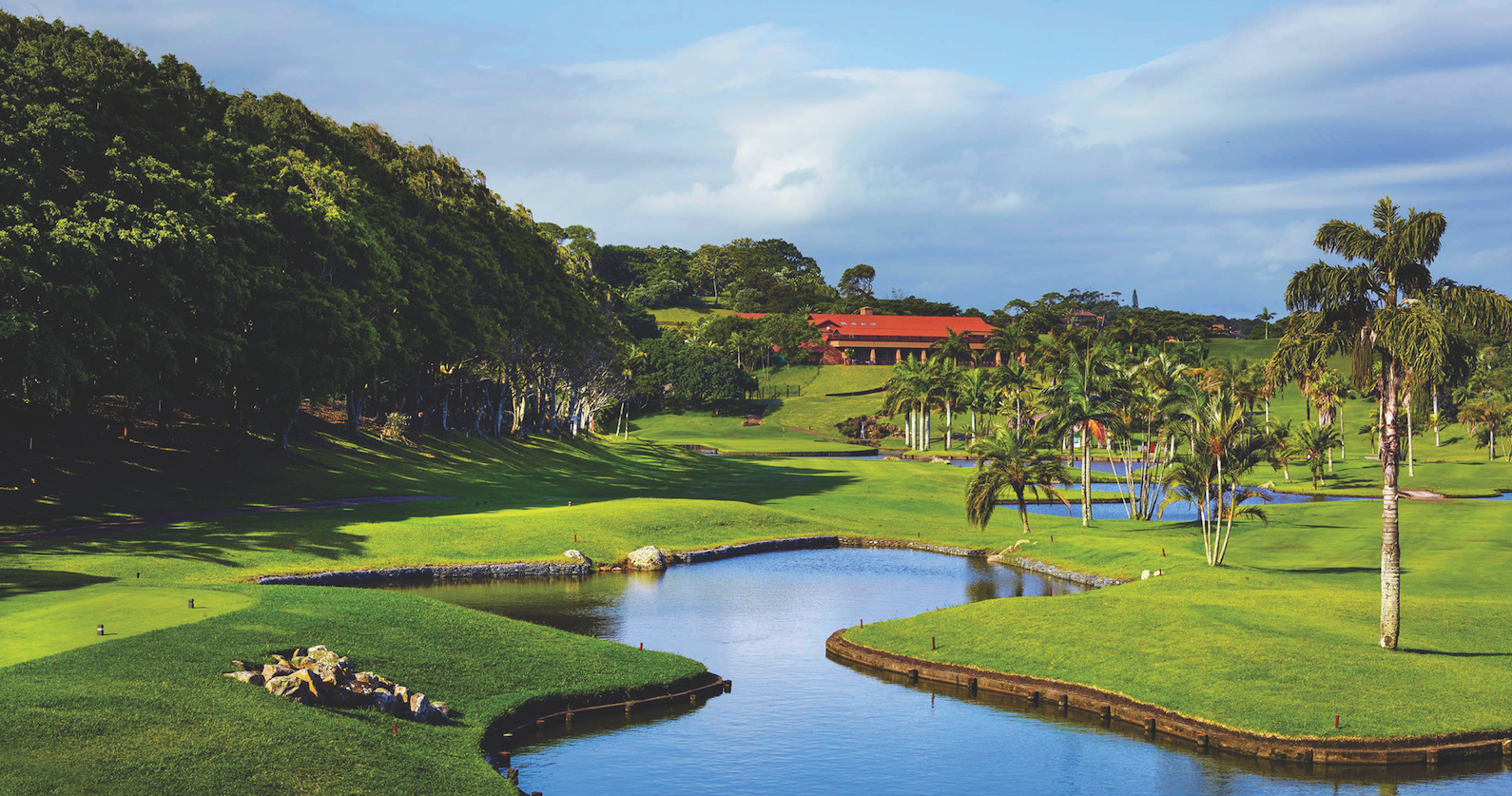 The closing hole is one of the most talked about for its beauty and difficulty in equal measure. Again, an iron is the play off the tee as the ‘Road Hole’ has out of bounds left of the narrow fairway which has water down the right. An island green that slopes from back to front requires nerves of steel as onlookers from the clubhouse watch
your approach. Par here is worth its weight in gold and often is more than enough to win a matchplay game that
has gone the distance.

San Lameer Country Club stands alone in its offering of championship golf played in pristine conditions all year round coupled with an array of off-course activities. It’s a place where you arrive as a visitor and leave as a friend. The only downside is that friends are expected to visit at least once a year.

Get a 7 day detailed weather forecast for San Lameer Country Club on GolfWeather.com. 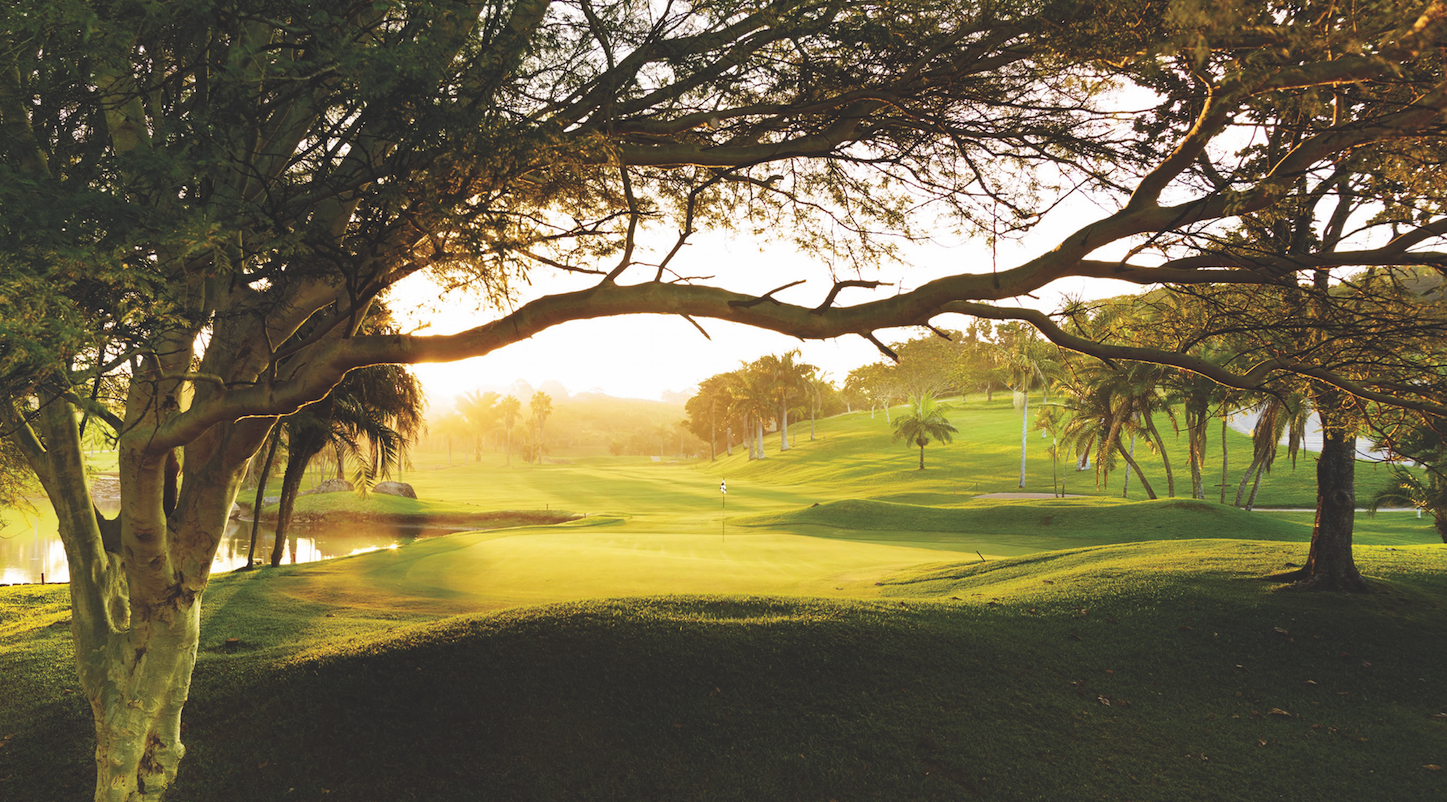